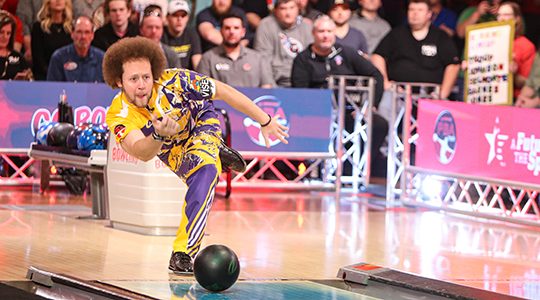 The word
"curve" is a rather familiar one within the bowling community. If the
recent tournament experiences of some within that community are any indication,
that word is about to become part of an equally familiar phrase as they figure
out how to balance tournament play with social distancing: “learning curve.”

"Yes, I could have
done social distancing a little bit better," said Josh Johnson, manager at
Nassau Bowling Center, a 20-lane establishment in Yulee, Fla., where Walter Ray
Williams Jr. was among 47 bowlers who competed in an eight-game sweeper won by
Trevor Roberts on May 24. "I felt that I may have had too many people in
here at once, but that we were under the number 80 at all times in the
building."

That number — the total capacity permitted by local authorities as Florida businesses gradually reopened against the backdrop of a pandemic — initially was supposed to be 40. A May 12 post on Johnson's Facebook page announcing the tournament did specifically say, "I will be limiting to 40 entries due to COVID-19 guidelines. Unfortunately also means bowlers only."

On May 15, however,
Johnson posted that, "As of Monday, we are now allowed 50% capacity which
will allow us to hold roughly 80 occupants."

Trouble was, neither
Walter Ray nor his wife Fancy saw Johnson's May 15 update.

"We didn't know
that, because if that had been the case, there's a chance I would have gone up
and watched," said Fancy.

Instead, Walter Ray woke
up at 6 a.m. on May 24 to make the two-and-a-half-hour drive alone from his
home to Yulee, thinking he still was bowling a "bowlers only" event
with no spectators and a maximum of 40 competitors.

"I walked in the
building and I was the only one wearing a mask. I was a little disappointed
about that," said Walter Ray, who was attracted to the event in part by
its use of Kegel's demanding "Highway to Hell" lane pattern.
"They ended up with five or six on a pair and they had spectators. In
hindsight, I should have gone home."

Influencing his decision
to stay, he said, was the fact that he otherwise would have driven five hours
that day for nothing.

Johnson, with whom
Walter Ray won the PBA South Region Member/Non-Member Doubles tournament at Break
Point Alley Bowling Center in Tavares, Fla., in November, said, "I thought
it was his option to stay here or, if he was uncomfortable bowling, to leave.
But he did choose to stay and he had a great time."

Johnson said he opened up the center's bar area, which was closed at the time due to the state's mandate that bars remain closed, for bowlers to put their equipment so they would be better able to socially distance throughout the relatively small center. He also said he advised everyone to refrain from high-fiving and to do their best to stay distant from one another.

"I had plenty of
sanitation set up throughout the center. I made as much room as I could,"
said Johnson, who added that, "It’s making me feel like I let everybody
down. And I'm not that type of person. At all. Period."

Fancy emphasized the
seriousness of COVID-19, saying that, "I understand that everyone wants to
get back to some sense of normalcy, but we also have to take precaution because
we don't know exactly how this is going to proceed."

Kyle Troup, who finished
runner-up that day at a four-game sweeper hosted by Lane Glo Bowl South in New
Port Richey, Fla., said that house, like Nassau, did have spectators and did not
separate pairs with dark pairs in between. But, he notes, “It seems like an
impossible solution to have tournaments with every other pair shut down and
still have a profitable business.”

Troup added, “I was
probably guilty of a fist bump just because it’s habit. And then, being the guy
in the building with the afro, there still were people asking for pictures and
autographs. I still took pictures with them; however, there was no contact
between us, and as long as someone doesn’t straight cough or sneeze on me, I
think I’m going to be okay.”

PBA Regional champion Sean Riccardi, who won that event, said, “Me and my wife walked in with masks on but there were very few others wearing masks, which was kind of weird.” Riccardi and Troup also won the optional doubles portion of the tournament.

A call to Lane Glo
proprietor Chris Langlo requesting an interview was not returned.

PWBA standout Verity Crawley, who finished fourth at Lane Glo, said, “At first it was a little weird because I was expecting a lot of social distancing and I was expecting people to be quite awkward to one another … I was surprised to see people still high-five even though it was recommended not to.”

Crawley said she is not
one to give a lot of high-fives herself, but doing so is such an ingrained part
of bowling culture that even she found it hard to avoid.

“Someone would give me a
high five, and I felt a little uneasy as to whether I should high-five back.
After I did, I kind of had that realization, ‘Should I really have done that?’
And I would make sure I didn’t touch my face.”

PBA Regional champion
Nate Garcia, who also bowled the Lane Glo event, said, “The bowling center did
have their things where people had to be six feet apart, they had hand sanitizer,
all that stuff, but when it came to separation between people, there really
wasn’t anything different. People were keeping their space because they know
what’s going on, but there wasn’t strict enforcement. I just did my part by not
high-fiving anybody.”

Troup said Lane Glo was
indeed using dark pairs to separate open-play bowlers when he practiced there
later in the week, and Garcia said that also has been his experience at other
centers.

USBC Hall of Famer John Janawicz, who averaged 276 for six games at a tournament held at Lightning Strikes Bowl in Fort Myers, Fla., on May 30 before losing the title match to John Rakoski, 199-196, said he experienced social distancing and sanitization efforts there.

Danny Spink ran an
action-bowling inspired tournament the weekend of May 29 at St. Charles Lanes
in St. Charles, Mo., where 32 players each put up $1,000 with a top-four payout
every game. Brad Miller dominated, winning three of the eight games bowled,
finishing second twice, and winning the overall side-bet prize of $3,000. Each
game paid out $1,550 for first, $1,000 for second, $750 for third and $500 for
fourth.

“We were allowed to have
up to 40 spectators in the building,” which encompasses 32 lanes, Spink said.
He added that the event previously has attracted up to 200 spectators paying a
minimal admission price of $5, but this year the center charged $20 per ticket
in part to “limit it to the people who really wanted to be there.” The event
also raises money for the Leukemia & Lymphoma Society through its admission
fee.

Also helping to limit
capacity, said Brad Miller, was the fact that the event began at 9 p.m.

Spink said keeping a
dark pair between live pairs would have been difficult because the event was
being live-streamed courtesy of Tom Omara and the Nationwide Bowling Tour.

“Everybody’s well aware
of the social distancing guidelines, but, for the most part, people kept their
distance,” he said. While no players wore masks, Spink reported that several
spectators did.

The bottom line for tournament
organizers and bowlers alike as they negotiate the boundary between resuming
tournament play and protecting oneself against a pandemic is an acknowledgment
by all parties of the inherent risk they assume.

“I knew there was definitely a risk by even going to Florida,” said Troup, who made the journey from his native North Carolina. “But, you know, it’s been two months. There’s a lot of safety guidelines and everybody is a lot more cautious right now. If we’re wearing masks and staying sanitized and staying clean, I think we’re going to be alright.”

To subscribe to Bowlers Journal International now for much more of the industry's best coverage of bowling news and incisive instructional tips and analysis, go here: /bowlers-journal-subscriptions/