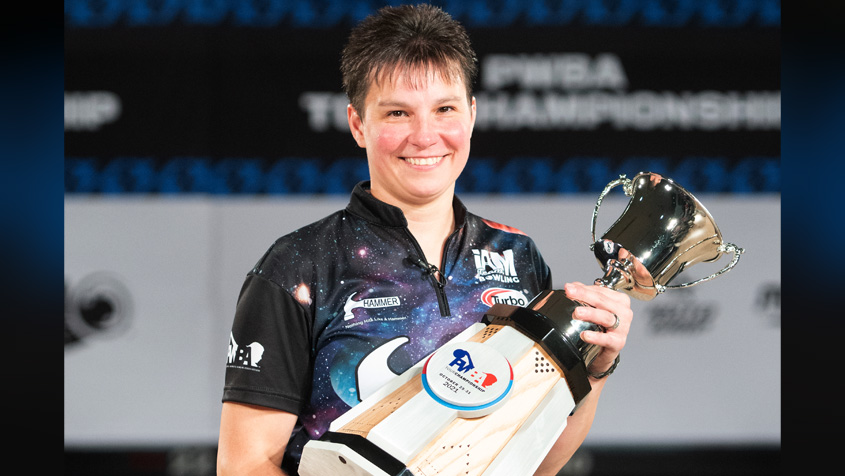 DALLAS - As the sun prepares to set on the 2022 Professional Women's Bowling Association season, the city of Dallas will serve as the backdrop for another historic week with three titles on the line, one major championship to be determined and two players taking home postseason honors.

And, if that's not enough, Shannon Pluhowsky of Dayton, Ohio, who garnered a long-awaited win at last season's PWBA Tour Championship, is in the field and hopeful for another great run to end the season.

USA Bowl will play host to the Dallas Classic Series and will feature the final three events of the season. Tuesday's official practice session will kick off the week and will be followed by three national tour stops. The tournaments on the schedule include the PWBA Dallas Classic (Aug. 3-4), PWBA Pepsi Classic (Aug. 5-6) and PWBA Tour Championship (Aug. 7-9).

All qualifying and match-play rounds, including the stepladder finals of the Dallas Classic and Pepsi Classic, will be broadcast on BowlTV.com. The winner of each event will earn $10,000.

The finals of the PWBA Tour Championship will be broadcast live Aug. 9 at 7 p.m. Eastern on CBS Sports Network, with the winner taking home a $50,000 top prize.

Pluhowsky enters this week as the reigning Tour Championship winner after defeating 2021 PWBA Player of the Year Bryanna Coté of Tucson, Arizona, 244-178, at the National Bowling Stadium in Reno, Nevada, last season to claim her second career major title, and first since 2006.

Prior to her victory, the 39-year-old left-hander, who will celebrate her 40th birthday Aug. 8, had made 15 championship-round appearances since 2015. The consistent knocking at the PWBA championship door from the left hand of one of the most decorated athletes in history went unanswered for 15 years.

Tears and heartache had been far too common following television appearances for Pluhowsky, but her moment last season allowed her to remove the proverbial "monkey off her back."

"It was a 'finally' moment," Pluhowsky said. "There had been lots of tears and heartache along the way, but in the end it was worth it. Just the satisfaction that I was able to win. I just had to remain positive and take what I learned from each of the previous times I failed on TV and apply it. I tried to have more fun on TV and make it less stressful."

Pluhowsky's first major title came at the 2006 United States Bowling Congress Queens, but during a time where there was not a professional women's tour. After completing one of the most accomplished collegiate careers in the sport's history at Nebraska, Pluhowsky had all the ingredients for a hall-of-fame career out of college but no professional platform to showcase her skills.

She didn't get to feel what it was like to live out a dream of winning on tour until last season.

"I had dreamt of winning, and it was what I imagined," Pluhowsky said. "You never know how you will react, but I think the true emotion came out, making it more special. The only thing I would have changed was having the rest of my family there, but sharing it with Carrie and my dad was great. Bryanna and I have known each other for a long time and being able to compete against each other on TV was special. She had an amazing season and I was glad the player of the year was decided before our match."

Pluhowsky's platform came in the form of Team USA, where she is the longest active member in the program. After winning the 2022 USBC Team USA Trials in January, Pluhowsky earned a spot on the team for the 22nd consecutive season.

Her Team Trials win was a great start to the new year and on the heels of her victory at the Stadium. One would think she was primed for a breakout season on tour, but that's not how things have shaped up.

Statistically, the 2022 season has been Pluhowsky's worst on tour. For context, Pluhowsky averaged at least 210 from 2015-2021, but she's only averaging 202 so far this season. But, there is a reason for it. It's one word, which starts with I and ends with Y, and it's been a common theme on tour this season. If you guessed "injury," you are a winner.

She's been dealing with an injury to her left ring finger, which has made her ability to repeat shots extremely difficult. Repeatability is the name of the game and for someone of Pluhowsky's caliber, the decline in performance makes more sense.

Pluhowsky's getting healthy at the right time, however. Last weekend, she advanced to the semifinals of the Professional Bowlers Association/PWBA Striking Against Breast Cancer Mixed Doubles event with PBA Hall of Famer Tommy Jones. She's feeling better and hoping for a good week.

"I don't really know what type of injury," Pluhowsky said. "It's just really sore to bend, and the knuckle had been swollen. I am very lucky to have a great support system helping me get healthy. Ken Keegan and Keith Boyd started from scratch with my measurements and Bob Kelly has been drilling so many new bowling balls and helping me get my fit perfect. I actually lengthened it for the first time in a while. Eric (Krauss) and Mike (Wolfe) have given me some fresh bowling balls to drill and been patient while I worked through the issue. Turbo provided different grips until I figured out what felt best. The support has been great."

The battle for PWBA Player of the Year will once again be decided during the final three events and depending on the players involved, it may come down to the title match of the Tour Championship.

Two-time PWBA Player of the Year Shannon O'Keefe of Shiloh, Illinois, leads the season-long points list with 79,250, while Danielle McEwan of Stony Point, New York, trails by less than 10,000 points with 70,835. Coté's chances of repeating as player of the year remain alive as she sits in third with 66,415.

O'Keefe leads the tour in championship-round appearances with five and has one win this season, which came at the PWBA Twin Cities Open. She also finished sixth at the PWBA St. Petersburg-Clearwater Open, seventh at the PWBA Long Island Classic and tied for ninth at the USBC Queens. She won the award in 2018 and 2019.

McEwan has yet to win a title in 2022 but has four championship-round appearances, including back-to-back runner-up finishes at the PWBA BVL Classic and U.S. Women's Open. She was second to O'Keefe in the player-of-the-year race in both 2018 and 2019, and if she's able to win the award for the first time this season, the meaning would be immense.

"It would mean everything," McEwan said. "It's the goal that drives me through the highs and lows of each event of the season."

Coté won the PWBA BVL Classic for her only title this season and also has four championship-round appearances, making the finals in three consecutive events during one stretch. She finished second in back-to-back events at the PWBA St. Petersburg-Clearwater Open and PWBA Long Island Classic.

In the race for PWBA Rookie of the Year, Chelsea Klingler of Grand Rapids, Michigan, holds a slim lead (16,975) over Olivia Farwell of Elizabethtown, Pennsylvania (16,540).

Other rookies who could make the race interesting with big weeks in Dallas include Marissa Allison of Sylvania, Ohio, Kaylene Bishop of Medical Lake, Washington, Jessica Earnest of Hermitage, Tennessee, Canada's Sarah Klassen and Lisa Timm of Auburn, Illinois.

The same format will be used for the Dallas Classic and Pepsi Classic. The field of 83 athletes will bowl 12 games of qualifying, before the top 12 players advance to round-robin match play.

After 12 games of match play, the top five bowlers will advance to the stepladder finals, based on total pinfall and bonus pins for each victory in match play. Julia Bond of Aurora, Illinois, is the defending Pepsi Classic champion.

The PWBA Tour Championship will feature the top 24 players from the Dallas Classic and Pepsi Classic, based on their 24-game qualifying totals. Total pinfall will drop at the start of the Tour Championship, and the 24 advancers will bowl 24 games of round-robin match play to determine the five bowlers for the stepladder finals, based on total pinfall and bonus pins.
Skip Ad