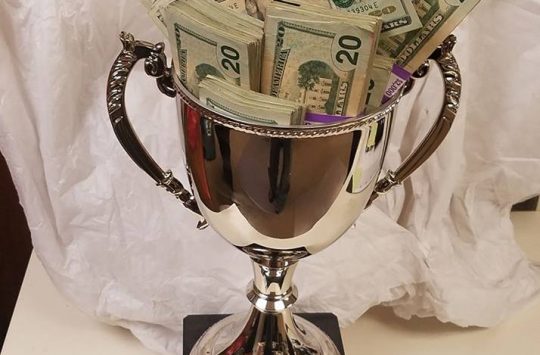 Left: Proprietors Cup founder Billy Eysoldt claims on Aug. 15 that he donated "the first $10,000" toward the 2020 proprietors Cup as he tries to encourage donations. Right: Two months later, following a text exchange with BJI's Editor that he subsequently posted on Facebook before taking it down the same day, Eysoldt discloses in an Oct. 12 post that, "I am broke and have been for years." As of this posting, BJI had not received response from Eysoldt asking him to clarify how he could have donated $10,000 if he also was broke at the time.

Billy Eysoldt, the founder of one of the country’s most lucrative bowling tournaments where increasingly talented fields compete one weekend a year for a five-figure top prize paid in cash, revealed in a Sept. 6 Facebook post that he owes $61,009.43 in combined back-taxes, penalties and interest to the Internal Revenue Service.

Subsequent information obtained by BJI reveals that around the same time the Proprietors Cup founder actively was soliciting monetary donations on Facebook and saying the proceeds would go toward the 2020 Proprietors Cup, debt collectors, one of whom had garnished his wages as recently as June, were pressuring him to pay back several thousand dollars in debt. Fairborn Municipal Court in Fairborn, Ohio, rendered a judgment against Eysoldt for $3,799.18 as recently as Sept. 11.

Eysoldt’s Proprietors Cup tournament, which was held for the seventh year in July, is renowned for paying all winners in cash rather than checks and for posting pictures online of top finishers brandishing fans of hundred-dollar bills. It also is renowned for the significant brackets action that flows through the building — Beaver Vu Bowl, where Eysoldt works the front desk. This year, four-time PBA Tour titlist Jakob Butturff won the event for a $27,500 payday in addition to any brackets winnings.

Though Eysoldt said in his Sept. 6 Facebook post that he decided publicly to disclose his IRS troubles in the spirit of “transparency,” he took down the post minutes later. In an Aug. 21 Facebook post he also since has taken down, Eysoldt explained his IRS problems as follows: “Over the past four years, 31 – 1099s mailed to bowlers came back as having a inaccurate social security numbers .”

The pictures of two IRS notices he made public along with his Sept. 6 Facebook post, however, pertained to section 6662 of IRS code, which does not involve issues relating to 1099s or false W-9s but rather pertains to underpayment of one’s own income tax. IRS.gov states that section 6662 authorizes “a penalty if a taxpayer’s negligence or disregard of rules or regulations caused an underpayment of tax.”

The issuance of 1099s to Proprietors Cup cashers has not always been a feature of the event; multiple sources confirmed with BJI that they never were issued 1099s despite winning four and five-figure amounts in the Proprietors Cup. IRS.gov states that “payments to the payee of at least $600 during the year” require the filing of a 1099 form.

Eysoldt further claimed in his Aug. 21 post that, “We currently do not have access to our Paypal account/business account until a audit is done … Please note that while we go through this process there will be a delay in refunds” for an October tournament called the Sport Cup, which he canceled. In an Oct. 12 Facebook post, the screenshot of which appears at the top of this story, Eysoldt stated, "Sport cup players the 1st refunds will start next week."

Seven days after claiming that an IRS audit had severed his access to his “Paypal account/business account,” Eysoldt actively was soliciting donations with numerous posts on his Facebook page on Aug. 28 and said the funds would go toward the 2020 Proprietors Cup, raising questions about where exactly that money was being kept if indeed his access to his “Paypal account/business account” had been frozen by the IRS. Fourteen days later, on Sept. 11, Fairborn Municipal Court rendered its judgment against Eysoldt for $3,799.18 in debt he owed to Capital One. Another debt collector, Midland Funding LLC, had released Eysoldt from a months-long wage garnishing arrangement on June 21.

Eysoldt had been posting on Facebook about plans for the 2020 Proprietors Cup for weeks, claiming in an Aug. 15 post that, though he is “just a desk employee,” he himself “will start by donating the first $10,000.” In his Oct. 12 Facebook post, however, Eysoldt said, "I am broke and have been for years." As of this posting, BJI had not received a response from Eysoldt asking him to clarify how he could have made a $10,000 donation to his own event if he also was broke at the same time, and whether he actually made such a donation or only claimed he had done so in order to build buzz around his fundraising campaign.

Describing the 2020 Proprietors Cup as “a life changing bowling event” for which he was “seeking sponsors, advertisers, and most importantly donations,” Eysoldt encouraged people to send him a message if they “can donate $1, $5, $10, or more.” It was not clear what the donations would go toward exactly — prize fund, expenses, entry-fee discounts, administration or something else related to the tournament.

In an Aug. 4 Facebook post touting a meeting he said he had coming up in Las Vegas, Eysoldt had claimed that “TV is done deal.” He reiterated that claim in an Aug. 15 post in which he wrote that, “TV is lined up, a LIVE Proprietors Cup finals on national TV paying one of bowling’s TOP prizes!” As of this posting, Eysoldt had not disclosed the name of the network with which he had reached such a deal.

When BJI reached out to Eysoldt to ask him why he still needs donations if indeed he has “lined up a live Proprietors Cup finals on national TV paying one of bowling’s top prizes,” why he took down his Sept. 6 Facebook post disclosing his $61,009.43 debt to the IRS within minutes of having posted it, whether he is concerned about the perception he creates when he solicits monetary donations after having disclosed that he is under IRS audit, and whether he has been paying taxes on his tournaments through the years, Eysdolt replied that, “I have been advised to say I have no comment at this time.”