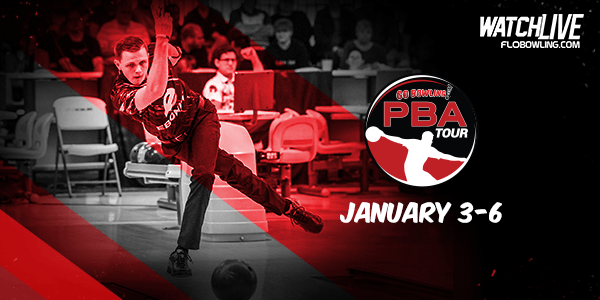 ARLINGTON, Texas (Jan. 3, 2019) – As the Professional Bowlers Association kicked off its 2019 Go Bowling! PBA Tour season Thursday with the first round of qualifying in the PBA Hall of Fame Classic at the International Research and Training Center, the race to qualify for the new PBA Playoffs that will be held in April in Portland, Maine, officially begins.

During the 2019 season, competition points will be awarded to all players in all PBA Tour events that are open to all players, with point values varying according to a three-tier system under a new system being introduced this season. Under the tier system, Tier 1 tournaments are major championships, Tier 2 events are standard PBA Tour events, and Tier 3 are limited field or abbreviated format events.

Here’s how the points system will work: Tier 3 tournaments establish the “base points” values starting with 2,500 for first place, 1,500 for second, 1,150 for third, 950 for fourth, 850 for fifth, etc. Points decline based upon how a player finishes in the event, but all players in the tournament will earn points. For Tier 2 events, the points values are doubled. For Tier 1 championship events, points will be worth three times the base value (i.e., 7,500 for first place, 4,500 for second, etc.) For a complete summary of the PBA’s competition points structure and tier values per tournament, visit:https://www.pba.com/SeasonStats/PointsList/114?list=1.

The PBA Hall of Fame Classic, which launches the PBA Tour’s historic season of television coverage by FOX Sports on its FOX and FS1 channels, will be the first event to offer points. The HOF Classic, which airs live on FS1 Sunday at 11 a.m. EST, is designated as a Tier 3 event because it includes a limited field (70 players) and an abbreviated format (six qualifying games for all players Thursday and Friday plus another six qualifying games for the top 18 on Saturday to determine Sunday’s top five stepladder finalists). All qualifying rounds will be live-streamed by PBA’s online streaming partner, FloBowling.

The FOX Sports portion of the 2019 schedule, concluding with the USBC Masters, will be the basis for qualifying for the PBA Playoffs. Of the 24 qualifiers, the top eight players will earn first round byes for the single-elimination match play playoffs which will reward the winner with a $100,000 prize.

Competition points also will be important for other reasons:

• Points earned in 2019 will qualify players for invitations to the 2020 DHC PBA Japan Invitational;

• 2019 points will be considered in selecting the 2019 Chris Schenkel PBA Player of the Year and Harry Golden PBA Rookie of the Year.