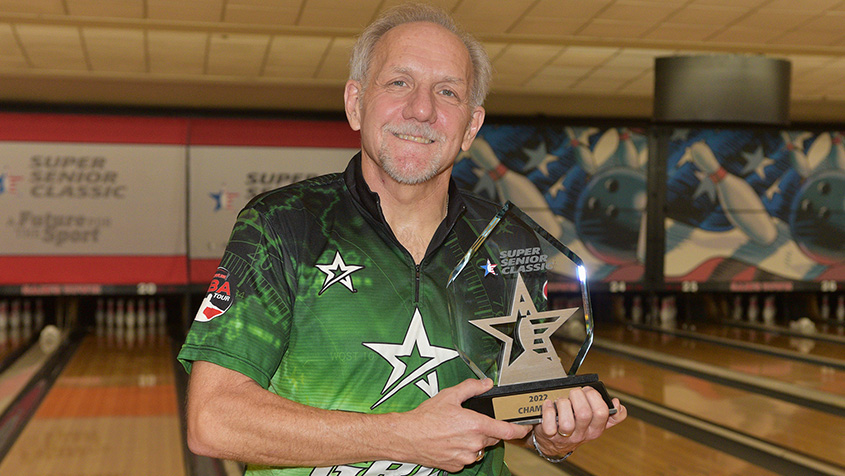 LAS VEGAS - Ron Mohr delivered a clutch double in the 10th frame of the title match at the 2022 Super Senior Classic to become the first player to win the event for United States Bowling Congress members age 60 and over multiple times Sunday.

Mohr needed two strikes and one pin in the final frame to claim the title over USBC Hall of Famer Lennie Boresch Jr. of Kenosha, Wisconsin, at the Sam's Town Bowling Center. Mohr rolled the necessary double and knocked over nine pins on his fill ball for a 222-213 victory and the $7,500 top prize.

The 66-year-old right-hander from Las Vegas has been a staple in the stepladder at the Super Senior Classic since becoming age-eligible for the event in 2016. To go along with his win in 2017, he has collected a pair of runner-up finishes (2016, 2021) and finished tied for fifth place in 2018 and 2019.

The tournament, which made its debut in 2013, had seen a new winner in each edition prior to Mohr's win Sunday.

"I know time wins," said Mohr, a member of the USBC Board of Directors. "That's the one thing that's a given. I'm 66 years old now. How long can I compete at this level? I don't know, but every time you do, it's encouraging.

"What concerned me before - did I still have the fire and passion? The analogy is when you're at the top of the hill, the view is really good. When you come down a level or two, it's still pretty good, but do you want to work that hard again to get back to the top or are you pretty happy with your resume? Watching Walter (Ray Williams Jr.) and Parker (Bohn III) and those guys and seeing how much they still want to win and what it means to them, it was great for me to feel that passion and fire again. More than that, I just want to have fun. I really enjoyed the stepladder today. Just to have the opportunity is as good as it gets."

Mohr found himself down early in the final against Boresch, who had earned the top seed Saturday. Mohr left a 4-6-10 split in the second frame he was unable to convert, and Boresch started with a double and strikes in five of his first seven frames.

"I think naturally my ball speed is too high for my rev rate, so it's a conscious battle for me to keep my speed down so it will match up better," Mohr said. "It surprised me how much it hooked. I didn't feel like I was that slow, so maybe it broke down a little bit since Lennie was closer to me than the other guys. I made a two-and-zero left and was able to refine it after that, settle down and get the ball speed back down."

The match tightened up in the eighth frame, when Boresch opened after leaving a 3-4-6-10 split. Mohr, who had left three consecutive 10 pins, starting in the sixth frame, rolled a strike in the ninth frame to set up the dramatic finish.

Boresch left and converted a 10 pin in the ninth frame, but he was able to roll three strikes in the final frame to put Mohr in a position to double to win.

"In the ninth, I just wanted to give myself a chance," Mohr said. "If I strike there, I couldn't be shut out, so it's in my hands. I was fortunate for a trip 4 (pin) to start the 10th, and I was really pleased with the way I threw the one in the 11th. I was on the tighter lane, so I wanted to make sure I just got it and threw it right. I threw it really well and liked it at 45 feet, and fortunately it rolled up and struck."

Mohr, the No. 2 seed, earned his spot in the championship match with a 259-192 victory over Pete McCordic of Katy, Texas, in the semifinal. Mohr rolled seven consecutive strikes, starting in the fourth frame, on his way to the win.

McCordic managed a 216-168 win in the opening match of the stepladder against Mitch Vernon of Olympia, Washington. McCordic built an early lead and never looked back as Vernon had back-to-back splits in the second and third frames.

Before the stepladder got underway Sunday, the final two spots were determined through simultaneous group stepladders, with McCordic and Vernon each winning a pair of matches to advance to the finals.

McCordic averaged more than 265 to advance out of Group A, starting with eight consecutive strikes in his first match against Eric Forkel of Henderson, Nevada, on the way to a 267-175 victory.

He started with seven consecutive strikes against Tom Adcock of Forsyth, Illinois, in the Group A final and rolled a strike on his first delivery in the 10th frame, followed by a nine count on his second shot, to lock up a 268-266 win to move to the main stepladder.

Vernon started his path to the main stepladder with a 236-215 win over Jon DeLaney of McKinney, Texas.

He bounced back from back-to-back opens to start the Group B final against defending champion and USBC and Professional Bowlers Association Hall of Famer Amleto Monacelli of Venezuela to advance with a 195-181 win.

The match-play finalists were split into two groups for six games of round-robin competition, with the top finisher in each group earning an automatic spot in the stepladder based on 24-game totals, including 30 bonus pins for each victory in match play. Boresch earned the top seed by having the highest overall total.

The second, third and fourth seeds from each group advanced to Sunday's group stepladders.

The USBC Senior Masters is next on the schedule at Sam's Town and gets underway Monday with the official practice session for more than 265 competitors age 50 and older. The first of three rounds of qualifying starts Tuesday at 11 a.m. Eastern.

Tom Hess of Granger, Iowa, returns as the defending champion at the Senior Masters in 2022. The win helped propel him to PBA50 Player and Rookie of the Year honors during the 2021 season, and he's now one of four players to win both the USBC Masters and Senior Masters.

Hess won his lone PBA Tour title at the 2011 Masters in Reno, and he is a two-time PBA50 champion.

All competitors at the 2022 Senior Masters will bowl three five-game blocks of qualifying over three days, and the top 63 will join Hess in the tournament's double-elimination bracket after 15 games.

Bracket matches will be contested in a three-game total-pinfall format, until the field is cut to the top five for the stepladder finals June 12 at 1 p.m. Eastern on BowlTV.