Sean Rash, Dom Barrett Round Out Final 8 in PBA Playoffs 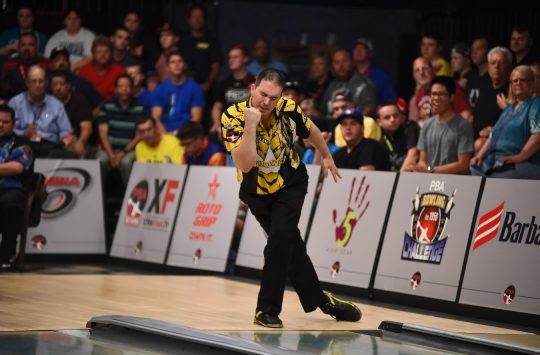 PORTLAND, Maine (May 13, 2019) – Seven-time Go Bowling! PBA Tour winner Dom Barrett of England, and 13-time tour winner Sean Rash of Montgomery, Illinois, won their PBA Playoffs Round of 16 Race to 2 Points matches that aired on FS1 Monday from Bayside Bowl to complete the lineup of players who advanced to the Round of 8.

Barrett, the No. 14 seed, won the first game of the Round of 16 match 236-222 over No. 3 seed Norm Duke of Clermont, Florida, who won his 39th and 40th career tour titles back-to-back earlier this season, but the PBA Hall of Famer came back in the second game by starting with the first five strikes to beat Barrett 236-174 forcing a ninth and 10th frame roll-off.

Both players tied in the roll-off, 40-40, which then sent the match into a one-ball roll-off. Barrett won the match with a strike when Duke left a 6 pin on his shot.

“I was comfortable in the first game, but I knew it was going to be a challenge in the second game when Norm started with the first five,” Barrett said. “I could feel it start to go away from me toward the end of the second game, but since I was out of it at that point, I changed to a different ball in the eighth frame and then used the remaining frames to figure out what I should do.

“I still wasn’t real comfortable in the two-frame roll-off but managed to hang in there. When Norm got nine in the one-ball roll-off, I thought that was my opportunity and I had better take advantage of it.”

“I had a good ball reaction in both games and was fortunate to take advantage of the opportunity I was given,” said Rash, who won the Mark Roth-Marshall Holman Doubles Championship with Matt Ogle for his 13th PBA Tour title earlier this season. “You need to fill frames anyway you can, but in the end, I felt like I only threw one bad shot.

“I was pretty much in control and Kyle was struggling in the first game,” Rash added. “It came down to strong finishes in both games. Kyle’s an excellent player and I didn’t want to give him too much hope.”

The first of two Round of 8 telecasts will air next Monday (May 20) on FS1 at 9 p.m. ET with No. 1 seed Jason Belmonte taking on No. 9 Kris Prather and No. 4 Anthony Simonsen meeting No. 21 Andres Gomez. The second Round of 8 telecast on May 27 will feature No. 7 Bill O’Neill vs. No. 15 Wes Malott and Barrett vs. Rash, which will determine the four players who will battle for the $100,000 first prize June 1-2 with live FOX semifinal and final matches from Bayside Bowl.

PBA PLAYOFFS ROUND OF 16 RESULTS

Round of 8 pairings (Race to 2 Points format)