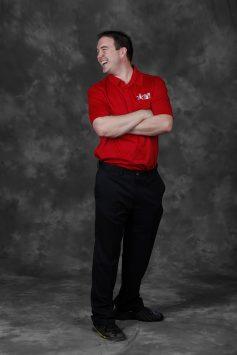 After qualifying for two PBA Fall Swing television finals over the weekend in Allen Park, Mich., Sean Rash was forced to make a mad dash to arrive in Cali, Colombia, late Monday where he joined his Team USA teammates for the opening event of the Pan American Bowling Championships.

It proved to be a “golden” trip for Rash.

It began on Sunday morning at Thunderbowl Lanes where the PBA, at the request of Team USA, provided a practice session on the PABCON lane condition for the players who were going to miss the official PABCON practice session. Most of the U.S. players then left for Colombia, but Rash still had TV finals to take care of.

After his final TV appearance Sunday, Rash rushed to the Detroit airport and flew to Houston. From Houston he flew to Panama. From Panama he flew to Cali. After arriving in Colombia on Monday, he had an hour-long drive directly to the bowling center in Cali, arriving just in time to bowl his PABCON singles event.

Rash started his six-game singles event with a 289, closed with another 289, and in between compiled a PABCON-record 1,482 pins to win the gold medal by seven pins over teammate and fellow PBA competitor John Szczerbinski. Colombia’s Manuel Otalora (also a PBA member) won bronze with 1,466 pins.

Szczerbinski, Marshall Kent and Ronnie Russell were among the PBA members who competed in the PBA Fall Swing before heading to Colombia. On Tuesday, Szczerbinski and amateur partner AJ Chapman combined for 2,786 pins to win the men’s doubles gold medal by 20 pins over teammates Kent and Russell.

Canada’s Francois Lavoie, a leading contender for PBA Rookie of the Year honors after qualifying for two PBA Fall Swing telecasts on CBS Sports Network, and teammate Mitch Hupe won the doubles bronze medal for Canada with 2,755 pins, and on Wednesday, Lavoie, Hupe and Zach Wilkins won the trios gold medal with 4,255 pins, 335 pins ahead of the Team USA trio of Russell, Chapman and Kent.

The PABCON Championships continue into the weekend with five-player team, all-events and Masters events yet to be contested. Women’s competition in the same events will be held next week.

The PBA Fall Swing began in Milwaukee in 2013 as the PBA Summer Swing, and through its four-year history, already has compiled a portfolio of interesting tidbits: