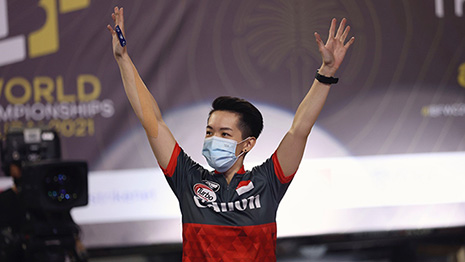 DUBAI, United Arab Emirates - Singapore's Shayna Ng and Cherie Tan are responsible for more than half of the medals their country has won at the International Bowling Federation Super World Championships, and they added two more Friday night in women's singles.

The teammates faced off for the first gold medal of the 2021 edition of the event, and Ng earned the top prize via roll-off, 49-27, after they each won one game in the best-of-two format.

Ng struck on seven of her first nine deliveries in the opening game, including a stretch of six consecutive strikes, on the way to a 234-215 win over Tan. 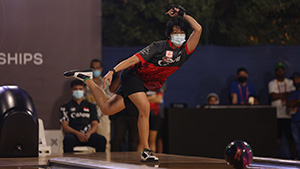 A ball change from Tan early in Game 2 helped her roll five consecutive strikes on the way to a 236-206 victory to force the roll-off.

Tan started the roll-off by leaving, and converting, the 3-5-6-9-10 combination. Ng's first delivery resulted in a strike, and she stepped up in the 10th frame needing a double to lock up the second gold medal of her career at the IBF Super World Championships.

She recorded a strike on her first delivery, but a 4 pin on her second shot, followed by the spare conversion, gave Tan the opportunity to roll three strikes in her 10th frame to win by one pin.

Tan's first shot hit the pocket, but she left a 7-10 split to fall short. 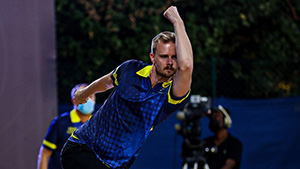 The contests took place on an open-air two-lane setup basking in the Dubai moonlight.

The custom venue was created specifically for the medal rounds of the 2021 IBF Super World Championships and built in the Sports, Fitness and Wellbeing Hub at Expo 2020 Dubai, a multicultural event that includes exhibits from more than 190 countries and will last six months.

Ng's win marked the third gold medal for Singapore's women's team in the history of the tournament, and she now owns two of them.

The 32-year-old right-hander claimed Singapore's first gold medal at the World Championships when she won all-events in nearby Abu Dhabi, United Arab Emirates, in 2015. Tan struck gold in Las Vegas in 2019 when she won the tournament-ending Masters event.

The teammates also made the singles medal round together in 2015, with Tan taking the silver medal and Ng earning bronze. They did not meet in the semifinals.

The road to the gold included 10 qualifying games over two days, seven games of round-robin match play, a one-game quarterfinal round and a bus ride of nearly an hour from the Dubai International Bowling Centre to the Expo 2020 Dubai site.

In the night's first women's semifinal, Tan rolled five consecutive strikes, starting in the second frame, on her way to a 246-194 victory over Canada's Sarah Klassen.

Klassen stayed close through the first six frames, before back-to-back opens in the seventh and eighth frames. Tan delivered seven strikes and stayed clean in the win.

Ng delivered strikes on her final four shots to shut out Guatemala's Sofia Rodriguez in the second semifinal, 216-203.

Both players missed single pins in the first half of the matchup, but Rodriguez grabbed the advantage with strikes in the sixth, seventh and eighth frames. She was unable to record a fourth consecutive strike in the ninth frame, however. She left a 7 pin, which gave Ng the chance to lock up the victory in her final two frames.

Klassen and Rodriguez each earned bronze medals for advancing to the semifinals.

Blomgren advanced to the gold-medal match with a 236-196 win over Italy's Nicola Pongolini in the first men's semifinal.

Blomgren recorded seven strikes on his way to the victory. Pongolini was unable to strike on the right lane until the 10th frame.

The Finnish two-hander held a slight advantage throughout the match, but Ji kept it close with four consecutive strikes, starting in the fifth frame. A 7 pin in the ninth frame slowed Ji, and he was unable to put additional pressure on Kayhko in his final frame, leaving the 4-6-7-10 split.

All 133 men and 92 women competing at the Super World Championships bowled 10 games over two days - five games on Saturday and five games on Monday - before the respective fields were cut to the top 32 for match play.

Kayhko tied for the final spot and defeated Singapore's Jonovan Neo, 244-205, to advance to match play.

The advancing players were divided into four groups, each with eight competitors, and they all bowled seven games of round-robin match play Wednesday.

Points were awarded for each win in match play, and the top two bowlers in each group, based on points, advanced to the bracket-style quarterfinals.

The next medals awarded will be in doubles, with the medal round scheduled for Saturday night. Trios will conclude Sunday, and both team and mixed team will wrap up Monday. Doubles, trios and both team events will feature variations of the Baker format from start to finish.

Team USA's Andrew Anderson and Kristopher Prather will appear in the doubles semifinals, and they'll be joined by Jakob Butturff and AJ Johnson for the trios medal round.

The United States entered the 2021 event as the reigning world champions in both men's and women's trios. The Team USA women were eliminated in the quarterfinals this week.

Additional medals will be awarded to the most valuable athletes and top-performing federations.

Competition at the Super World Championships will resume early Saturday with 10 games of qualifying for the coveted team event. All teams will bowl 10 qualifying games, and the field will be cut to the top 16 teams for round-robin match play.

IBF is providing livestream coverage and complete results at StrikeCloud.com.