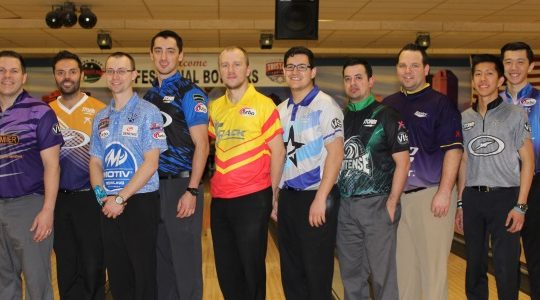 COLUMBUS, Ohio (March 21, 2018) – Australia’s Jason Belmonte and partner Bill O’Neill of Langhorne, Pa., will be the top qualifiers when the Go Bowling! PBA Tour returns to ESPN Sunday at 2 p.m. EDT for the finals of the Mark Roth/Marshall Holman PBA Doubles Championship presented by BowlerX.com from Wayne Webb’s Columbus Bowl.

In the opening Baker format stepladder match, where each player on the team alternates frames, brothers Michael and Darren Tang of San Francisco will face off against Texans DJ Archer and Shawn Maldonado.

The Tang brothers, who were collegiate standouts with San Jose State, will be looking for their first PBA Tour titles. Maldonado will also be trying for his first tour win while Archer will be trying for his third.

The winner of the opening match will then take on Brandon Novak of Chillicothe, Ohio and Kris Prather of Plainfield, Ill., who are also looking for their first PBA Tour titles, in the second stepladder match. Prather is coming off a fourth-place finish in the Barbasol PBA Players Championship and an eighth-place finish in the 60th Anniversary Classic.

The match two winner will then meet 2016 PBA Player of the Year and nine-time tour winner EJ Tackett of Huntington, Ind., and four-time tour titlist Marshall Kent of Yakima, Wash., in the semifinal match. Kent is coming off a second-place finish in the Go Bowling! 60th Anniversary Classic and third-place finish in the Players Championship.

Belmonte, who will be trying for his 17th Tour title, is coming off a fourth-place finish in the Tournament of Champions and runner-up finish in the Players Championship. O’Neill, trying for his ninth tour title, finished sixth in both the Players Championship and 60th Anniversary Classic. Belmonte, the reigning four-time PBA Player of the Year, and O’Neill have made it into the Roth/Holman Doubles finals three previous times, finishing fourth on each occasion.

The Doubles Championship finalists earned their spots in the stepladder finals through their combined qualifying scores and a separate 16-game Baker format qualifying round held in conjunction with the Players Championship.

The Doubles Championship is named in honor of the PBA Hall of Famers who were three-time PBA doubles champions. Both will be on hand to present the championship trophies to the winners.