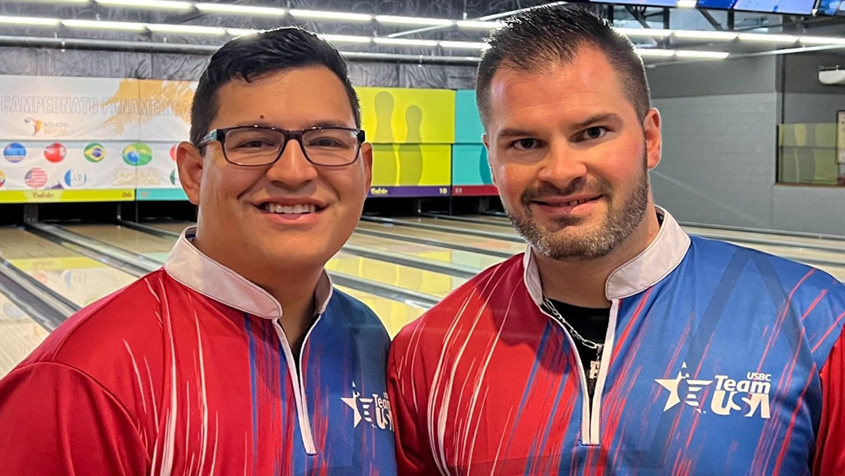 Rio de Janeiro – Team USA’s bid to qualify for the 2023 Pan American Games in Santiago, Chile, got off to a good start after American duos captured both the men’s and women’s gold medals in doubles at the PANAM Bowling Champion of Champions at the Bowling Social Club in Rio de Janeiro on Tuesday.

Kristopher Prather of Romeoville, Illinois, and A.J. Johnson of Oswego, Illinois, got things rolling for Team USA, capturing the men’s gold medal with a combined eight-game total of 3,710.

Johnson thinks that Tuesday’s gold-medal performance was due in large part to the pair’s comfort level with one another and their ability to communicate effectively while on the lanes.

“Kris and I have gotten some experience bowling together in past years, not necessarily doubles together, but we bowled on the team together, and we’ve communicated very well from then on,” Johnson said. “We’re by no means similar players physically and what we like to see, but the things that we can control, we see very similarly, and I think that translated into the success that we had out here today.”

Prather was pleased with that success, and he was quick to point out that it was something enjoyed by more than just the players and coaches present in Brazil this week.

“The part of Team USA that some people miss out on or don’t realize is that it is a team,” Prather said. “The first thing we did after we realized we won was text the guys back home and celebrate with them a little bit. Winning gold is obviously the goal, but whenever we say Team USA, we truly mean team. That’s something that we believe in and try to exemplify.”

The men’s silver medal went to James Stanley and Juan J. Rodriguez of Costa Rica, who authored a block total of 3,564. Guatemala’s Diego Aguilar and Marvin Leon took bronze with 3,530.

Not to be outdone by their male counterparts, Shannon O’Keefe of Shiloh, Illinois, and Bryanna Coté of Tucson, Arizona, captured gold medals of their own, using a combined eight-game total of 3,632 to cruise to the top of the women’s doubles standings.

Competing in her final tournament as a member of Team USA, O’Keefe got the duo headed in the right direction immediately, firing a 299 in Game 1 with only a wiggling 10 pin on the final shot keeping her from perfection.

Coté was steady throughout her set, breaking 200 in seven of eight games en route to a 1,703 total that gave her a 212.88 average and fourth place in the overall women’s standings.

But Coté wasn’t worried about the individual standings; instead, she was focused on enjoying the opportunity to bowl with O’Keefe and trying to help the veteran leave her final Team USA event in possession of more gold.

“This was my first time bowling doubles with Shannon, so I really wanted to bowl well to help her have a good ending tournament with Team USA,” Coté said. “I know that we would’ve had each other’s back win or lose, but to win doubles with one of the best in the world is priceless.”

O’Keefe was equally pleased with Tuesday’s victory, but she’s trying hard to concentrate on the bowling still left to be done as that will keep her mind from wandering to what it means for her when the tournament comes to an end.

“I really wanted to win this event with Bryanna, so it feels awesome to win gold knowing that this is my last Team USA event,” O’Keefe said. “Any time that I start really thinking about this being my last, I get emotional, so I’m really trying to shut that part of my brain off and execute one shot at a time. At the end of the week, I’ll allow myself to fall apart, but in the meantime, I’m just trying to put one foot in front of the other and do the best I can.”

That strategy allowed O’Keefe and Coté to finish nearly 200 pins ahead of the Colombian duo of Clara Guerrero and Juliana Franco, who took the silver medal with an eight-game total of 3,444. Stephanie Martins and Roberta Rodrigues of Brazil captured bronze with 3,415.

Team USA Head Coach Bryan O’Keefe wasn’t just happy with his wife’s strong performance Tuesday; he liked what he saw out of all four competitors during doubles.

“Both teams came out buzzin’ today,” Bryan O’Keefe said. “The guys had a little bit of a slow start with pin carry, but once they got lined up the last four, they were really striking. The girls were the opposite; they came out guns firing, and then they sort of had it on cruise control from there. The whole team was just buzzin’ all day.”

O’Keefe hopes that continues when singles action gets underway Wednesday.

The 2022 Champion of Champions features a pair of eight-game blocks for singles, one Wednesday and one Thursday, with 16-game pinfall totals determining the medalists.

The cumulative pinfall for 48 games for each country, in each gender-based division, will determine the three countries qualifying for the 2023 Pan American Games.