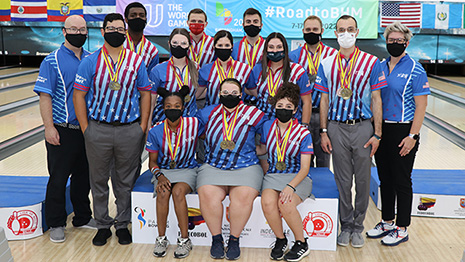 CALI, Colombia -Team USA may have been slow out of the gates this week at the 2021 PANAM Bowling Elite Championships, but the tournament ended perfectly, with the men and women sweeping the team and all-events gold medals.

Both teams entered the second half of the team event at the top of the standings, and both faltered early in Friday's three-game block, before regaining their composure and momentum to earn their spots atop the podium.

The Team USA men were the first to strike gold Friday at the 20-lane Bolera Departamental. They outlasted Canada to secure the title for the third consecutive time, this time averaging more than 207 as a team over the six games.

After Thursday's three games, Team USA held a 27-pin advantage over the Canadians but lost the lead after the opening game Friday, shooting 969 to Canada's 1,088.

"I knew it all wouldn't really hit us until we got up there on the podium and heard the start of the national anthem," Russo said. "This whole trip has been a lot of fun. I truly enjoy bowling with these guys. We're great friends, too, and I think that really helped with the communication. We also know each other's games well, and that definitely made it easier. It has been a dream of mine since I can remember to be out here winning medals, and there's nothing like it."

The Team USA women had a clearer path to the gold medal.

They led the eight-team field by 241 pins after Thursday's three games and extended that to 362 after six games. They topped the standings with a 6,093 total. They won the team title in Cali in 2014 and finished second to Colombia in 2016 and 2018.

Mexico closed with a 1,025 game to surge into second place, earning the silver medal with a 5,731 effort. Puerto Rico took the bronze with 5,683.

The end of the team event also determined this year's all-events medalists, as well as which countries qualified for the 2022 World Games and 2022 International Bowling Federation World Cup.

Russo, who is engaged to Lauren Pate, averaged nearly 212 across the four events (singles, doubles, trios, team) and 24 games to claim the top spot in the all-events standings with a 5,078 total. 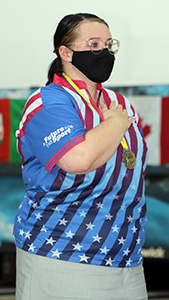 Clemmer set the pace on the women's side, averaging 207.96. She claimed the all-events gold medal with a 4,991 total. She also won doubles this week with Lauren Pate and grabbed a bronze medal in trios with Pate and Mason.

Mexico's Iliana Lomeli shot 280 in her final game to catapult herself to the silver medal with a 4,910 total. The bronze medal went to Coté with 4,856.

"This was my first tournament with adult Team USA, and I was pretty nervous, but I just tried to stick to my process and be with the girls as much as possible," said Clemmer, who also enjoyed a decorated career with Junior Team USA. "In a sense, I was a veteran in the group, but I tried to learn from each and every one of my teammates along the way. I had trust in them and believed in them, and I know they felt the same way about me. It truly was a team effort all week."

Additionally, the week included the 2021 edition of the PANAM Bowling Champion of Champions event, traditionally a standalone event that last was held in 2018. Due to the pandemic and uncertainty of the competitive schedule, it was held simultaneously with the PANAM Elite Championships and utilized some of the same scores.

Two men and two women from each country were designated by the coaches to have their scores used toward the 2021 edition of the Champion of Champions.

The top four countries, based on the combined 24-game pinfall totals in each gender classification, plus the United States, qualified for the 2022 World Games. Because that event is being held in Birmingham, Alabama, the United States automatically gets a spot as the host nation.

The Team USA representatives for the Champion of Champions event were Anderson, Russo, Bond and Coté.

The countries that qualified for the World Games from the men's field were Puerto Rico, Colombia, Costa Rica and Canada. For the women, Colombia, Mexico, Puerto Rico and Aruba advanced.

Competitors initially thought a spot in the World Games was all that was on the line for this year's Champion of Champions, but the top performers also were awarded gold medals based on their 24-game totals. 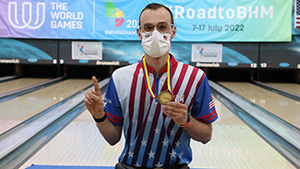 Russo claimed the prize on the men's side, marking his fifth Champion of Champions gold medal. He won four in four opportunities during his Team USA debut in 2018. He now has seven gold medals in 10 opportunities.

The Champion of Champions gold medal for the women went to Lomeli.

The qualifiers for the 2022 World Cup were determined by total pinfall for all six bowlers in Elite Championships competition, in their respective gender classifications.

Qualifiers on the men's side were the United States, Canada, Colombia and Puerto Rico. For the women, it was Team USA, Mexico, Puerto Rico and Colombia.

The World Cup previously featured one man and one woman from each country, but a change to the format will allow more competitors to become part of a tradition that spans more than five decades.

The tournaments this week at Bolera Departamental included the best bowlers from North, Central and South America, as well as the Caribbean.

There were 30 medals up for grabs at the Elite Championships and two available for the Champion of Champions.

"It was my first official event as the head coach for Team USA, and it was a roller coaster, for sure, but we had a great time and were able to take home some medals, which always is the goal," Team USA head coach Bryan O'Keefe said. "We learned a lot, everyone did their best, they gave it their all, they worked together and they're happy. That makes me happy, too. It definitely was a memorable week."