The Bowlers Journal Podcast: Mark Roth on the 40th Anniversary of his Record 1978 Season 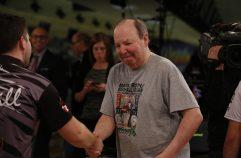 As part of Bowlers Journal's ongoing celebration of two special anniversaries in the bowling world this year--the PBA's 60th and BJI's 105th--the April 2018 issue features a story unearthed from the BJI archives that originally ran in February 1979. It captured Mark Roth at the height of his powers and fame following a record season in which he won eight titles in a single year. For this podcast in 2018, BJI Editor Gianmarc Manzione captured Mark Roth in a year that marks the 40th anniversary of that absolutely sensational season he experienced in 1978. There are some interesting facts about the record he set that year, some well-known and others not so much. For instance, did you know that in addition to setting a record for number of titles in a single season that year, he also set the record for the fewest tournaments bowled by a PBA Player of the Year? That’s right, Mark won eight titles that year despite skipping 10 out of the 36 PBA Tour stops held in 1978. Another thing to keep in mind is that Roth won each of those eight titles in a different bowling center, and the following year he won another seven for a combined 15 titles in two seasons. These are among the reasons why the bowling world may never again see the likes of what Mark Roth achieved at that time in his career, and Manzione asked Mark about all of it for this interview. So here is Manzione's full conversation with Roth who, by the way, also is celebrating his birthday this month. He turns 67 years old on April 10: https://soundcloud.com/user-658733792/pba-legend-mark-roth-on-his-record-1978-season