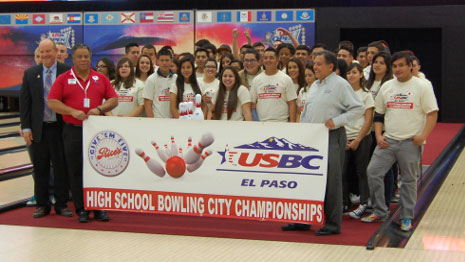 EL PASO, Texas - The El Paso Convention Center recently was transformed into a state-of-the-art bowling facility, and the special venue opened its doors for the first time this weekend, welcoming competitors for three special events.

The 2015 build features 52 lanes for Open Championships competition, 10 additional lanes for practice and a side event and spectator seating for hundreds of bowling fans.

The events gave El Pasoans the opportunity to experience the largest setup in USBC Open Championships history, which included the traditional march down the famed Center Aisle and the chance to see their names on the world's largest mobile scoreboard as they competed.

The Youth and Special Olympics Kick-Off had more than 250 entries, with bowlers competing in three handicap divisions in a three-game format. More than $13,000 in scholarships were awarded during the event.

The High School Bowling City Championships featured 21 teams of four (two boys and two girls) representing nine local high schools. The event featured three games and was designed to introduce the students to the sport of bowling, potentially securing their future in the sport.

"I have never bowled in a place like this," said Alejandro Dominguez, an 18-year-old junior who helped El Dorado High School No. 2 capture the team title. "There was some pressure, but it was an honor, and I'm proud to help my school take the top spot."

YWCA El Paso is the largest YWCA in the United States, and more than 175 people pre-registered for Monday's event.

"It's an outrageous opportunity to hold our very first bowling fundraiser in this venue," said Dr. Sandra Braham, Chief Executive Officer of YWCA El Paso. "This event (Open Championships) is so important to our city, and we're humbled and grateful to USBC for allowing us to hold our event here today."

The next scheduled event at the El Paso Convention Center is the Special Olympics National Unified Tournament, which will be held on the championship lanes March 4-5. The two-day event has been held in conjunction with the Open Championships every year since 1991.

The 2015 Open Championships will welcome the first of more than 40,000 bowlers March 7. The tournament will run daily until July 12. The 2015 event marks the tournament's first visit to El Paso and fourth trip to the state of Texas.