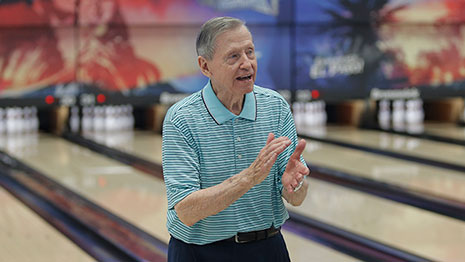 Lillard, elected to the USBC Hall of Fame in 1972, was an eight-time champion at the Open Championships, earning his first titles in team and Team All-Events as a member of Detroit's Pfeiffer Beer team in 1955.

The following year, he became the first of three bowlers in tournament history to claim four titles in the same year. Bowling with the Falstaffs team, he captured the team and Team All-Events titles, paired with Stan Gifford to win doubles and also took individual all-events. He would add Classic Team victories in 1962 and 1971.

In 2015, during his 68th consecutive tournament appearance, he became the Open Championships' career pinfall leader when he surpassed the mark set by late USBC Hall of Famer Joe Norris of San Diego.

Lillard, who was joined by his wife, Dorothy, for most of his appearances, had a career pinfall total of 124,087 at the Open Championships, an average of 196. Read about his record-setting day here.

Lillard is one of 11 bowlers in 114 years of tournament history to reach 65 years of participation at the Open Championships. Norris, fellow hall of famer Bill Doehrman of Fort Wayne, Indiana, and Sylvester Thiel of Lake City, Minnesota, top the list with 71 years.

Lillard was voted the Bowling Writers Association of America's Bowler of the Year in 1956, and he earned Bowling Magazine's recognition for first-team All-American in 1956 and 1957.

In December 1999, Bowlers Journal International had Lillard No. 15 on the list of the 100 greatest bowlers of the 20th century.

Of all his accomplishments, Lillard cited winning the four titles in one year (1956) and later finishing third in doubles with his son, Bill Jr., (Memphis, Tennessee, in 1981) as two of his top Open Championships memories. Bill Jr. now has 37 tournament appearances to his credit.

Visitation with Lillard's family will take place Thursday from 5 p.m. until 8 p.m. at George H Lewis and Sons Funeral Home in Houston. A memorial service will be held Friday at 11 a.m. at Houston's First Presbyterian Church, with a reception to follow in the church's Palm Court.
Skip Ad