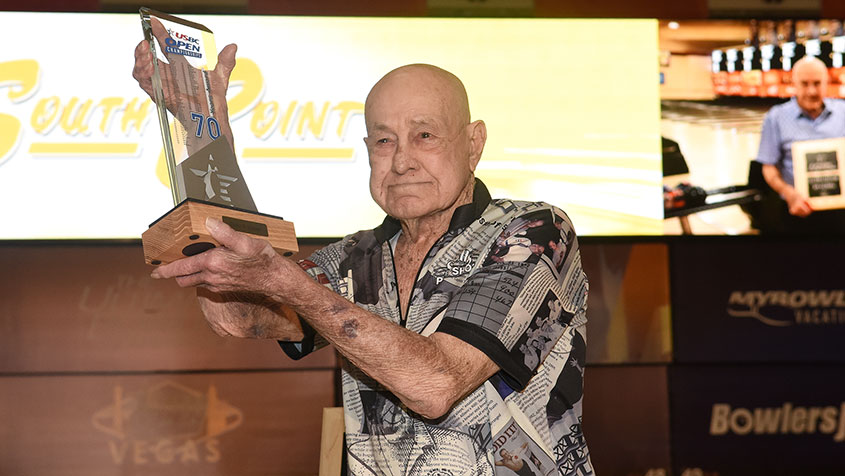 LAS VEGAS - Legend. Icon. Gentleman. One of the faces on bowling's Mount Rushmore.

All these terms describe Glenn Allison, the United States Bowling Congress and Professional Bowlers Association Hall of Famer, who celebrated his 70th year on the lanes Friday at the 2022 USBC Open Championships.

Allison, who made his first Open Championships appearance in 1947 in Los Angeles, is a true ambassador of the sport and has made his annual trek to the event each year since 1954.

He has earned his way into every important category in tournament history. He's a four-time champion (1962 Classic Doubles, 1964 and 1966 Classic Team, 1970 Classic Singles), one of 24 members of the 100,000-Pin Club and now, one of four competitors to reach 70 years of participation in the event's 118-year history.

Sharing the moment with Allison was his daughter, Suzanne Allison, and his grandson, Glenn Allison II. Oh, also hundreds of admirers from across the lanes at the South Point Bowling Plaza and in the stands.

"The respect I have received from everyone at the tournament has been great," Allison said. "Every year, it just becomes more special."

While Allison had the Bowling Plaza cheering him on, he mentioned two of his biggest fans from the earliest time in his career.

"Definitely my mom and dad," Allison said. "They were always cheering me on, and, if they could have, would have traveled to every tournament I bowled in."

Family is important to Allison, and he had two different family units with him at South Point for his milestone appearance.

"My regular family for sure, but also, my bowling family," Allison added with a smile. "Just look at how many people came out here to bowl with me. It's so gratifying."

His grandson bowled in his third Open Championships this week and was amazed and touched by the love and warmth his grandfather gets from everyone.

"I never realized the magnitude of his accomplishments until I came to my first USBC in 2019 and saw it firsthand," Glenn Allison II said. "To me, he is just grandpa. To everyone else, he is something much greater. I understand that now and could not be prouder of him."

In his remarks to the crowd prior to his squad, Allison made mention of two fellow hall of famers that also were dear friends of his.

"Bill Lillard and Joe Norris were two of the best gentlemen I have ever met, and we became great friends," Allison said. "I think of them often, and I know they would be very happy for me for today's accomplishments."

Lillard, Norris and Allison stand as the top three in career pinfall at the Open Championships. Lillard is the all-time leader with 124,087 pins, and Norris is second with 123,770. Allison closed the gap and now has toppled 122,468 pins in his career after his appearance this week in Las Vegas.

"When I hit 100,000 pins, Bill drove down from Houston to the tournament in Corpus Christi to congratulate me," Allison said. "Both he and Joe were so easy going and down to earth, even though they were the top guns in the sport."

Allison now joins Norris, USBC Hall of Famer William Doehrman and Sylvester Thiel as the only bowlers to reach 70 appearances at the Open Championships. Norris, Doehrman and Thiel each finished their careers with 71 tournament appearances.

With continued good health, Allison will tie that mark next year at the National Bowling Stadium in Reno, Nevada.

As part of his iconic bowling career, he also was associated with the classic Saturday afternoon television broadcasts on ABC. These bowling telecasts were hosted by Chris Schenkel. While mainly behind the scenes, he was on-camera as Schenkel's color commentator for one broadcast.

"Chris usually worked with either Billy Welu or Dick Weber," Allison said. "One Saturday, both Billy and Dick were participating, so with only about 15 minutes of notice, they said I was going to be Chris' partner.

"At least I did not have a long time to think about it," he added with a laugh. "Chris was a great person and broadcaster, and he really loved the sport of bowling."

In his 70th appearance, the 91-year-old right-hander from Corona, California, rolled 421 in singles, 385 in doubles with his longtime friend and teammate, Jerry Hale, and 361 in team for a 1,167 all-events total.

"It was amazing watching dad all weekend," said his daughter, Suzanne, also bowling in her third USBC Open Championships. "I consistently had a tear in my eye."

From the audience, to the USBC and South Point Bowling Plaza staff, it was a once-in-a-generation experience that will not soon be forgotten.

"I am very blessed to be here," Allison added.