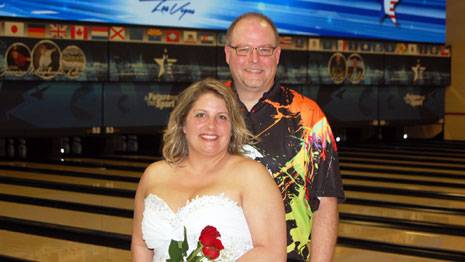 LAS VEGAS - During the 2017 United States Bowling Congress Open Championships, we will have the opportunity to meet and speak with more than 50,000 bowlers from all over the world.

Some are well-known, some are yet-to-be-known, but all of them have personal stories to tell and memories to share about their time at the USBC Open Championships.

In the past, we've caught up with some of the bowlers for an online feature called On The Lanes, where we asked them all the same 12 questions to see how the answers might vary based on different generations, skill levels and experience.

On The Lanes deviates from our traditional news-sharing format, but it offers different insight into the competitors at the Open Championships.

We're adding yet another option in 2017 and introducing a question-and-answer format for some of our most interesting bowlers to see how they got started, where they came from and what their Las Vegas experience was like.

In this edition, we will introduce, not one, but two people, who shared a special moment together Thursday at the South Point Bowling Plaza.

Mitzi O'Connor and Doug Forde of Wisconsin Rapids, Wisconsin, said "I Do!" on the championship lanes just before the start of the 5:30 p.m. team squad.

The nuptials were broadcast live on the official Open Championships Facebook page. That can be seen here.

Although Forde wasn't preparing to compete on the incoming squad, he will hit the lanes with a talented group Friday evening. His team includes past Regular Team champions Jason Wendt (2003, 2010) and Ken Kempf (2010).

For now, we are pleased to introduce Mr. and Mrs. Forde.

USBC - How long have the two of you been together and engaged?

FORDES -We have been engaged for a couple of years. Last year, the guys were talking about making it official during the Open Championships in Las Vegas, and we thought it would be cool to get married on the lanes. After a few emails back and forth it, was a go.

USBC - Where was the proposal made, and who did the asking?

FORDES -At a 40th birthday party for Doug, that I (Mitzi,) threw in his honor, Doug popped the question. I said yes. At that time, we had been together five years.

USBC - We heard you did not have a ring?

FORDES -I didn't know I was going to propose to her during the party, so I grabbed a straw and tied it into a ring. Surrounded by friends and family, I got down on one knee in the middle of the bar that was hosting my birthday party. I am glad she said yes. That week, I went out and got her a ring.

USBC - What off-the-lanes plans do you have while you are in Las Vegas?

FORDES -We plan on seeing some shows while we're here, and we're going to check out the dueling piano bar at the New York, New York Hotel and Casino.

USBC - What are your thoughts as you await your time on the championship lanes this week?

FORDES -We have a pretty good team, and if we all stick to the game plan, we could have a great shot at the lead. My teammates and groomsmen are Jason Wendt a 2003 and 2010 team champion and Kenny Kempf, a 2010 team champion. I will look to their experience to keep me in line.

Doug, who will be making his 10th Open Championships appearance, said he was most nervous on the lanes during the wedding, so the bowling part should he should be just fine.

Click here to see the 2017 #USBCOpen Spotlight - Volume 2 with the OC's Brian Hirsch.