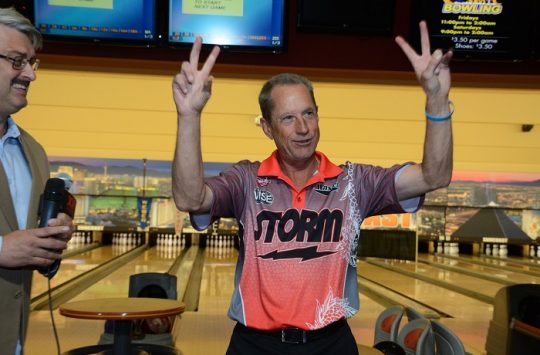 CHICAGO – Despite missing four of 13 tournaments, Pete Weber put together the most dominant season since the Professional Bowlers Association started its division for players 50 years of age and older in 1981.

Weber also had second-place finishes in the PBA50 Northern California Classic presented by MOTIV and the PBA50 Treasure Island Resort & Casino World Championship presented by Storm, and a fourth-place in the season-opening Pasco County Florida Open, which was his lowest finish of the season.

“Don’t get me wrong, I threw the ball well this year but I have to admit I got a lot of breaks this year and it seemed like my opponents got the bad breaks,” said Weber. “It was just one of those years. I hated to miss those last three tournaments because there was probably another title there somewhere.”

Weber’s season ended prematurely because of a nagging hip injury that he hopes won’t be a factor as he gets ready for the upcoming PBA Fall Swing that starts over the Labor Day weekend in suburban Detroit.

“It’s in good shape now after going to the doctor and not bowling for a while,” Weber said. “I’ll probably take another week off and have my brother Rich do a little analysis of how I’m throwing the ball and just go from there.”

With his six wins, Weber ran his career PBA50 Tour win total to 10 which puts him in a tie with Walter Ray Williams Jr. for fourth place on the all-time PBA50 Tour titles list. John Handegard is the leader with 14 titles.

“I had some pretty good years on the PBA Tour where I won multiple titles and made a lot of shows but winning (PBA50) Player of the Year two years in a row ranks right up there with what I was able to accomplish on the ‘kids’ tour,” said Weber, who never won player of the year on the regular tour. “The atmosphere is a little different on the PBA50 Tour than it is on the regular tour but I can tell you, nobody’s intimidated.”

Weber’s closest competitor in earnings was Monacelli with $38,775. Monacelli was the only other multiple winner in 2016, capturing two titles, the PBA50 Fountain Valley Open presented by Track and the PBA50 National Championship to Benefit Riley Hospital for Children for his seventh PBA50 title and fourth major.

With their wins on the PBA50 Tour, Weber and Williams also edged closer to the 100 overall PBA titles mark with both players currently sitting at 99, including PBA Tour, PBA Regional, PBA50 Tour and PBA50 Regional titles.

As the top rookie in points, Graham, a five-time PBA Regional titlist including the 2007 Regional Players Invitational, earned Rookie of the Year honors.

Graham cashed in the last nine consecutive tournaments of the season and won his first PBA50 Tour title in the DeHayes Insurance Group Championship.

With his big finish, Graham also moved into eighth place on the season-long competition points list to qualify for the PBA50 Challenge which will be contested on Nov. 27 and aired live on Xtra Frame as part of the GEICO PBA World Series of Bowling VIII in Reno. Graham will join Weber, Monacelli, Duke, Williams, Voss, Parker Bohn III and Mohr in the eight-game round robin match play event. All eight also earned paid entries to compete in WSOB VIII.

Mohr, in earning PBA60 Player of the Year honors, had six PBA50 top-five finishes and eight top fives, including the ITRC Super Senior Classic and PBA60 Dick Weber Championship presented by Hammer, which were limited to players 60 years and older.

Among Mohr’s top finishes were second-place finishes in the UnitedHealthcare Sun Bowl In The Villages and the Dick Weber Championship.

In addition to Weber, Monacelli, Duke, Williams and Bohn will return to action against the younger generation in the PBA Fall Swing at Thunderbowl Lanes in Allen Park, Mich. Sept. 4-11.