The European quartet of Mika Koivuniemi, Dominic Barrett, Stuart Williams and Martin Larsen hold a slim two-point lead and need four more on the road to 17 to win back the Weber Cup they lost to the Americans three years ago. The current standings after four of the five sessions at the Metrodome, Barnsley in north-east England have Europe of 13 points, the Americans on 11.

Are the Americans downhearted? Put your money that they are. They opened the event with a 5-1 lead but today they let the Europeans through an open door and now the roles are reversed. Team captain Chris Barnes is rallying his crew of Tommy Jones, Mike Fagan and Bill O'Neill in an effort to win six matches in tonight's final session.

"The pattern is going to be short for this squad, which will be close to Friday's," said Chris Barnes. "I cost my team a couple of points this afternoon, two points are four in this deal, so I put our team in a hole we shouldn't be in. I've got to bowl better and I think the team will be more comfortable on this shorter pattern of 38 feet. We shall see if we can take advantage of that. We've been on 39 feet, 43, 43, 41 and now 38."

Action commences with a Baker team game, which so far have all gone Europe's way, then into singles matches until 17 points have been reached. It could go into the wee small hours if points are shared in the opening matches.

First blood to the Americans as they win their first Baker team match this year. Now the format shifts to singles play.

Ah! What a shame! A stubborn 10-pin with the second ball of the tenth frame robbed us of the third perfect game of the 2013 Weber Cup, so instead of 300 on Bill O'Neill's score he had to be content with 289. But perhaps more importantly, it was another point for Team USA and now the playing field is level with both teams on 13, each needing four points for victory.

A squeaker? You can bet your bottom dollar on that. Koivuniemi had to hit a strike with his final ball to beat Jones by a single pin and he did just that.

Opening up an early lead as Jones suffered two splits in the first two frames to drop 41 pins adrift, Koivuniemi looked to have it made, but a quick ball switch by Jones brought him back into the strike pocket and he was back in contention after a four-bagger. A strike with his final ball in thee tenth would have shut Koivuniemi out, but that was not to be. Europe 14, USA 13. Game on.

Another single pin victory, this time for the Americans and once again it was a 7-10 split that threw the advantage from Europe to America. The seventh frame brought the drama for Koivuniemi as that horrible split reared its ugly head. On Friday he did convert the 7-10 but has left it a couple of times more, never being able to repeat the feat.

Honors even once again in the race to 17 points.

Europe once more with a couple of fingers on the Weber Cup as Barrett gives a masterclass to O'Neill. The American just could not score a double right up until the tenth frame, when it didn't matter anyway. A spare with the first ball of the tenth would have given him a Dutch 200.

How different for the Americans it could have been if Tommy Jones had not missed the single 10-pin in frame two. And also he was truly robbed in frame seven when a truly accurate ball into the pocket curiously left the 9-pin, denying him a string of six strikes. Now it is up to Chris Barnes to defeat Stuart Williams to defend the title. 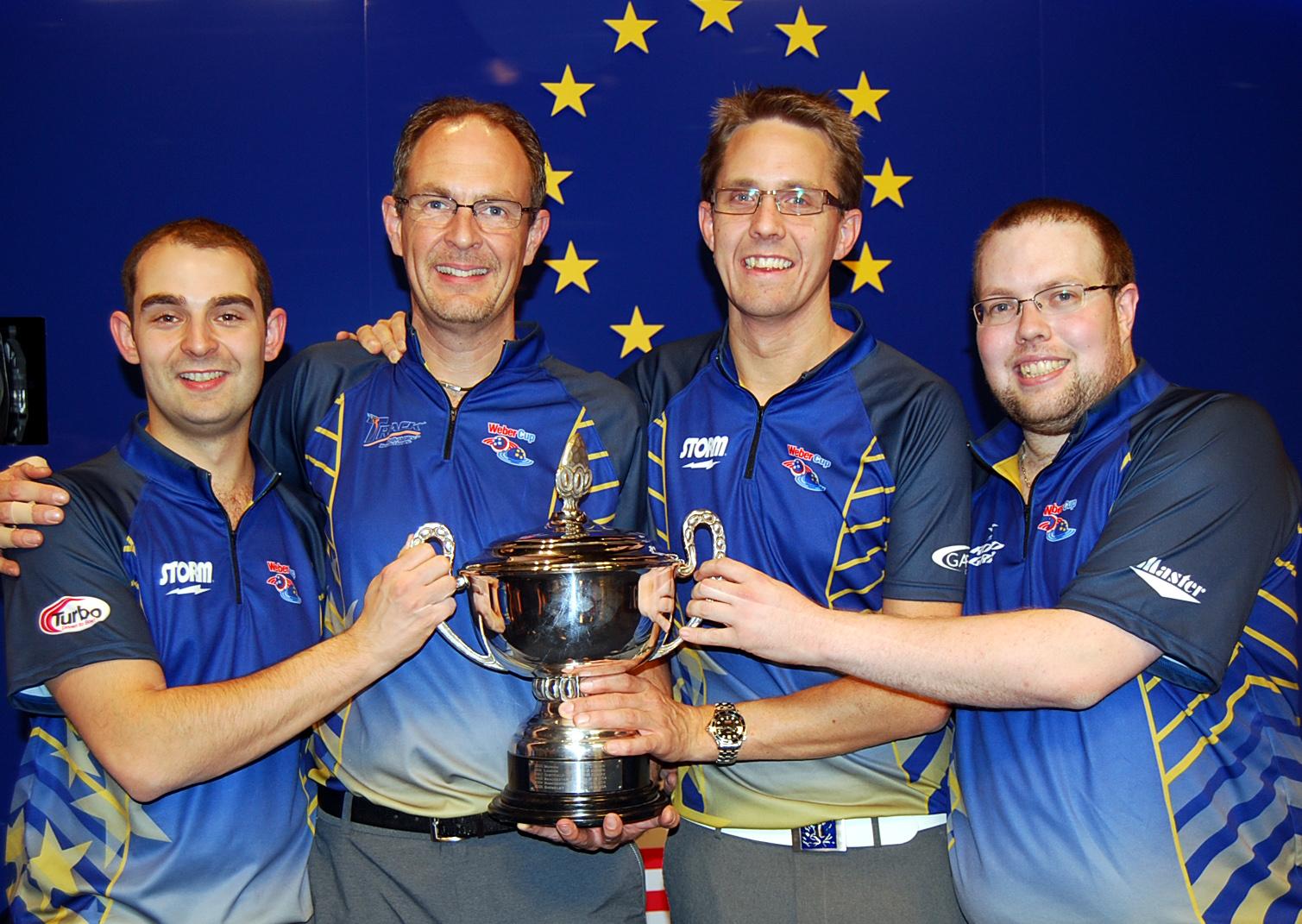 Ever gracious in defeat. American captain Chris Barnes summed up the evening's disappointing result: "Breaks come and they go and we didn't do a very good job of taking advantage of the lead we did hold. Disappointing for sure, we just kept making too many mistakes in too many key spots. I let two chances get away with things that don't normally happen. It's been just one those days as we kept giving them points that maybe they didn't deserve. I was getting a good reaction and thought I was bowling good enough to win."

Nobody is prouder than rookie European captain Mika Koivuniemi. "It has been unbelievable being part of that victory," he told us. "After such a bad start on Friday I am really proud of my team. There have been so many highlights as they all stepped up when they were needed, everybody bowled great. Of course, Williams closing out was a great moment. Larsen threw a strike to win by a single pin and Barrett bowled so well the whole weekend like a great champion and I had my moments, too. It has just been great teamwork. I think the change came when we all sat down on Friday night after being 5-1 down and decided what we needed to do to get more strikes and to get our balls to go through the pins better. We worked as a team, discussed everything and I think that is what made the difference,"