Why 'More Turn' Does Not Mean 'More Hook' 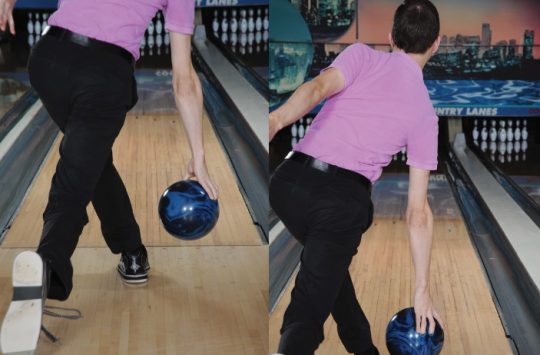 I often see bowlers misread what is happening on the lane. Let’s say that the ball is not finishing on the back end. A somewhat logical response is to try to “hook” the ball more to ensure that it finishes. Some bowlers try to lift more, while others try to turn it more. In either case, these fixes usually exacerbate the problem.

The problem is that the ball is not grabbing soon enough. A full appreciation of this aspect of ball motion requires understanding of side roll. When you turn the ball, yes, it has more potential to hook later down the lane. This is because side roll stores energy, which delays hook. However, if reaction is delayed too long, the ball will run out of time to hook. This is especially true if you are bowling on heavier oil.

On oilier conditions, the ball naturally slides. Creating more side roll will only further delay the hook. On oily conditions, you need to get the ball to hook sooner, which means staying behind the ball longer to create more forward roll. Forward roll grabs sooner, while side turn creates more length.

When this is the case, do not make the mistake of trying to turn it more to get it to hook more on the back end. Instead, stay behind the ball longer to create more forward roll to get it to grab sooner. This is a case where more turn does not always create more hook. 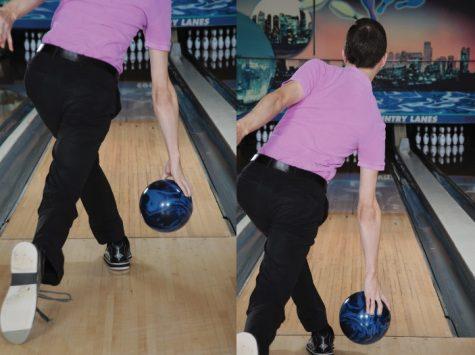 It is very common to turn the ball too soon or too much (left). Work on turning after the thumb exits, rather than while the thumb is still in. Turning too soon, while the thumb is still in, leads to more side roll. When trying to stay behind the ball (right) a good trick is to think about keeping your elbow in, leading with your ring finger to turn the ball. This will help you turn through it, rather than around it.

On sport patterns, you will typically miss the pocket light when the ball does not hook soon

So, be careful about trying to “put more on it” or, at least, understand how to go about it. It is important to understand that you are not always trying to do more to the ball. Rather, you are trying to create an effective roll with good technique, not force. Good ball roll with sound lane play strategy is a formula for success. Developing a strong roll does not mean that you will feel a lot of pressure on your fingers (i.e., lift). You want to get into a strong position of leverage and roll the ball off the pads of your fingers onto the lane. You are not trying to lift or squeeze the ball; rather, you want to get the ball off your hand as cleanly as possible. This creates a more predictable and controllable ball reaction, especially with the stronger bowling balls in today’s game.

The bottom line is this: Forward roll gets the ball to grab and change direction sooner on the lane. Side roll creates more length and delays hook. On oily lane conditions, your strategy is not to try to turn and lift the ball more; doing so will only further delay ball reaction. Instead, create more forward roll by staying behind the ball longer to get it to read sooner.

Conversely, on drier lanes, when the ball tends to grab and hook too soon, side roll will help it skid more and react later. When the lanes require you to move inside and deliver at an angle more away from the pocket, this delay effectively stores energy so the ball can react more on the back end. This helps the ball hook back and drive more into the pocket because of the energy it stores for down-lane.

While those pointers address the way you rotate the ball, the number of revolutions you get is a different matter altogether. Rotation is the angle at which the ball is revolving down the lane. Revolutions are the number of times the ball rolls over its circumference on the lane. Suffice it to say that rotation refers to the angle of the roll, whereas revolution refers to the amount of action.

I see bowlers all the time who want to hook or “rev” the ball more, much like they see someone do it either in league or on TV.

Some bowlers have natural talent and wrist strength to create more revolutions, or revs, than the average bowler. They actually load the wrist by cupping it to get their fingers under the ball, then unload it by quickly uncapping it at release. This motion comes naturally to them and involves God-given strength and talent. With this, they create more revolution, for a higher “rev rate.”

Generally speaking, professional bowlers have higher rev rates, and men generally have higher rev rates than women do, because of their strength. The good news is that bowlers with various rotations and rev rates can compete, staying within their games to create effective strategy and proper adjustments on the lane.

Your game and timing are typically solidified around the release. Trying to become a different type of bowler than you are just doesn’t work. Instead, spare yourself the frustration and play your game. I have seen too many bowlers misunderstand this concept and ruin their swings trying to create a release (specifically, a higher rev rate) that is not their own.

Work on getting through the ball cleaner, creating effective rotation to carry. I once had a student tell me he couldn’t feel his fingers in the shot. When I watched, he was so tense, squeezing the ball. After we worked on his timing and relaxed his swing, his ball roll and projection toward the target steadily improved. He said he could feel the ball roll of the pads of his fingers. He accomplished this with leverage and technique, rather than force.

Many of us find staying behind the ball longer a challenge. In part, this is because of how our bodies are put together. If you just let your arms relax by your side, you’ll see your hands naturally face your body. This resembles being on the side of the ball at release. Turning your hands to open them up feels unnatural, let alone trying to do it with a heavy load.

I personally know this challenge, and when I tried to stay behind it more, I had to really overexaggerate opening my hand at release, and this was just to see a slight change in roll. I would attempt to keep my hand flat behind the ball as I released it, turning as little as possible. It felt flatter but I was usually more to the side than I thought. Any amount you can stay behind it more when you are trying to get the ball to read sooner will help.

It takes a lot of practice to modify your release. It is easy to let your tendency overcome your

work. When you work on your release, be prepared for how much you have to exaggerate to realize any change. If your work enables you to carry a few more shots here and there or be just that much more effective on a given lane condition, it will have been worth it. Be patient.

It is very common to turn the ball too soon or too much. Work on turning after the

Try to keep your elbow in and stay behind the ball until your thumb comes out. Once your thumb clears, turn the ball. It is not easy to determine whether your hand is behind the ball until your thumb comes out, but you will see it in your ball roll and reaction. That is your feedback. A good trick is to think about keeping your elbow in, leading with your ring finger to turn the ball. This will help you turn through it, rather than around it. Also, always strive to relax your thumb so it can come out cleaner and earlier at release.

Note that when you stay more behind the ball, you will not see as sharp of a hook on the backend. The ball will have more of an arc into the pocket. The ball may seem to go straighter only because it is actually hooking sooner. The different shape of the shot enables you to match the ball’s reaction to lane conditions for the best roll to carry.

Michelle Mullen is a USBC Gold-level coach and the author of two books, “Bowling Fundamentals” and “How to Pick Up Spares.” Her instructional column, "Foundation Frame," appears bimonthly in Bowers Journal International. To subscribe now for much more of the industry's best coverage of bowling news and incisive instructional tips and analysis, go here: /bowlers-journal-subscriptions/