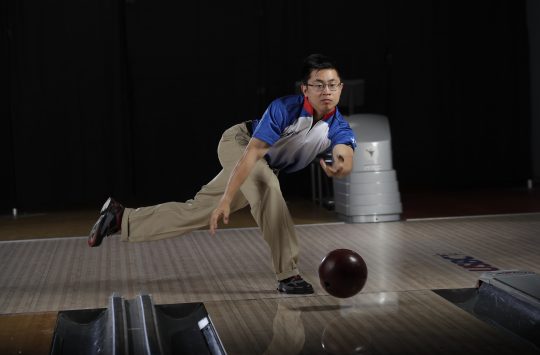 Entering his senior year at Wichita State with a 3.66 grade point average, Low, a native of Palmdale, Calif., is majoring in business management and has been a member of the Dean’s list for the past two years.

“As a collegiate bowler I’ve met a lot of great bowlers who are also good people, so to be able to win this award is a real honor,” said the 21-year-old Low. “I feel very fortunate to be a Wichita State student where I can enjoy a great education with my passion for bowling at a high level.

“I chose business management as a major because I want to eventually pursue a career in the bowling industry,” Low added. “For me, it’s the best of both worlds.”

Low, who uses a left-handed two-handed delivery, has won several collegiate honors while bowling with Wichita State including 2017 Intercollegiate Team Championships Most Valuable Player, 2018 National Collegiate Bowling Coaches Association First Team All-American, 2017 Second Team All-American, and 2018 International Bowling Media Association Collegiate Bowler of the Year runner-up. His accomplishments as both an outstanding player, as well as demonstrating an outstanding work ethic and qualities as a team player, have also earned him team leader honors for the Wichita State men’s team.

Low began to demonstrate his prowess as a bowler at a very young age, competing as an amateur (with parental consent) and cashing for scholarship money at a PBA West Region tournament at age 14. He has won four PBA Regional events under PBA’s non-member participation rules, including his first at age 15.

While his priority is to complete his business management degree in the 2018-19 school year, he has left no doubt that he will compete on the Go Bowling! PBA Tour sometime after he graduates.

“We’ll have to see what the schedule looks like next year, but my plan will be to go out on tour when I’ve completed school,” Low said. “With the experience I’ve had as a Junior Team USA member and bowling collegiately, I feel I’ll be as ready as I can be to give it my best shot.”

The $1,000 scholarship award was established to annually recognize a college student who combines outstanding bowling talents with academic excellence. Welu, who passed away in 1974, was best known for his expert analysis alongside legendary ABC broadcaster and PBA Hall of Famer Chris Schenkel on the “Pro Bowlers Tour” series. Welu was a two-time PBA Tour champion and a member of the PBA Hall of Fame’s inaugural induction class in 1975.