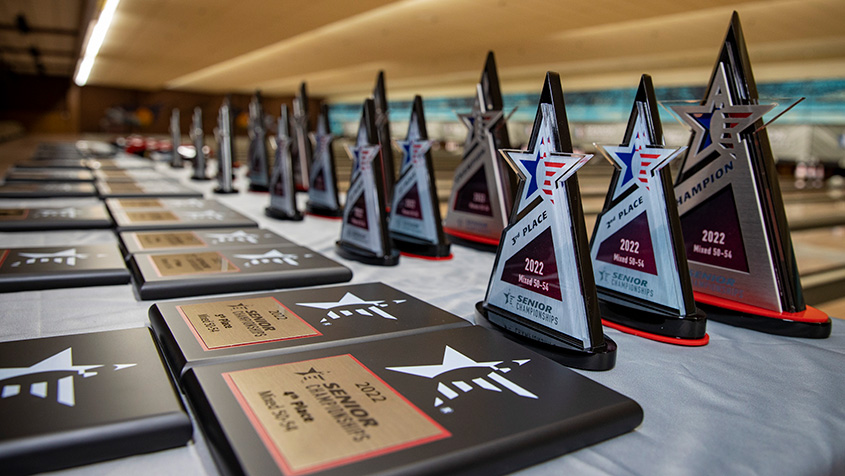 LOUISVILLE, Ky. - A dozen national titlists were determined Friday at Executive Strike and Spare with the conclusion of the 2022 United States Bowling Congress Senior Championships.

The USBC Senior Championships is a national event that welcomes bowlers from the United States and Canada who earned their spot through either a state or province senior tournament.

At the conclusion of six games, the top six scores in each division, including handicap, advanced to the championship round Friday at Executive Strike and Spare.

In the Women's division, Illinois' Dawn Trodler came from the No. 3 seed to record the victory in the 50-54 classification, finishing with a 727 total. It marks the second consecutive year that Trodler has won a title on the national stage. She was part of the Ruby Team champion at the 2021 USBC Women's Championships.

In 55-59, Ohio's Kris Kunkel saved her best game for last and took advantage of the bonus pins as the top seed to edge Mary Berkenstock of British Columbia by four pins for the win, 742-738.

Alaska's Susan Polis was consistent during her three games Friday in the finals of the 60-64 classification, rolling 188, 184 and 180 to push her overall total to 798, including handicap and bonus pins, to cruise to the top spot. Polis entered with a 139 average.

Indiana's Shirley Arnett made her way to the winner's circle as the No. 5 qualifier in 65-69. Arnett took advantage of her 10 bonus pins to finish with a 728 total to record the win over Georgia's Wilma McPherson, the No. 6 qualifier, by eight pins.

Linda Lewis of Utah finished at the top of the leaderboard in 70-74, posting three games over her entering average of 129 to claim the win with a 704 total.

In the 75 and older classification in the Women's division, Maryland's Iris Mitchell earned the title with a 694 score.

Looking at the Mixed division, Manitoba's Villarico Villarin rolled to a big win as the top qualifier in the 50-54 classification, finishing with a 786 total.

In 55-59, Richard Aderholdt of North Carolina put together three games above 200 for a 655 scratch total, bringing his overall score to 761 as the No. 5 qualifier to record the victory.

Arkansas' Robert Hall fired 267 in his second game of the finals in 65-69, which helped propel him to the top of the standings as the No. 1 qualifier with a 774 score.

Ed Cook of South Carolina put up the top overall score in the finals at the 2022 Senior Championships, finishing with an 801 total to collect the win in the 70-74 classification.

New Mexico's Abe Jaramillo recorded the win in the 75 and older classification, finishing nearly 100 pins (scratch) over his entering average of 123 to take home the victory with an overall score of 756.