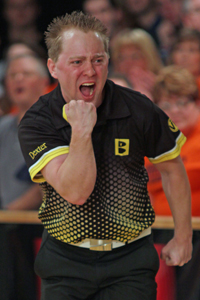 Young dominated the men's championship match from the start, opening up with a double and never looking back. He used a stretch of four consecutive strikes starting in the fourth frame to put the match away.

"This is unbelievable because not in a million years did I think singles would be on TV, and I would be the one winning it all," Young said. "I was pretty nervous at first, but I calmed down and focused on what I needed to do."

In the semifinals, Young got off to a shaky start and trailed Anthony Fiorenzo of Calumet by as much as 22 pins early, but Young strung together six strikes in the back half of the game to take control and win the match, 242-192.

Steiner got out of the gates quick with four consecutive strikes in his semifinal against Pikeville's Lucas Hohnstein, but three consecutive splits for opens starting in the seventh frame tightened up the match. Steiner converted the 3-9 spare in the final frame and struck on the fill ball to shut out Hohnstein, 195-181.

In the women's title match, Drewes threw an early double and bowled a clean game as she took the lead from the first frame and never trailed. 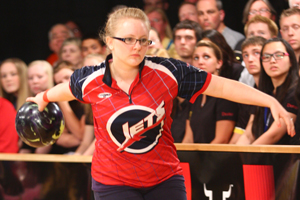 "I was more nervous when I was on the practice lanes, and I actually thought I would be sickly nervous when I got on the lanes, but it wasn't too bad," Drewes said. "My heart was beating pretty fast, but I just kept to my routine. Since I'm a senior, I just hope this gives Newman a little recruiting boost in the future."

Drewes edged out Wichita State's Jazreel Tan in the semifinals, 226-207. She led heading into the final frame, but secured the victory when Tan left and missed the 2-4-5-8 in the final frame.

Bolton tossed eight strikes en route to a 221-170 win against Katie Zwiefelhofer of Wisconsin-Whitewater. Zwiefelhofer was up by one pin after four frames but hit a rough patch in the middle of the game that included two splits for opens.