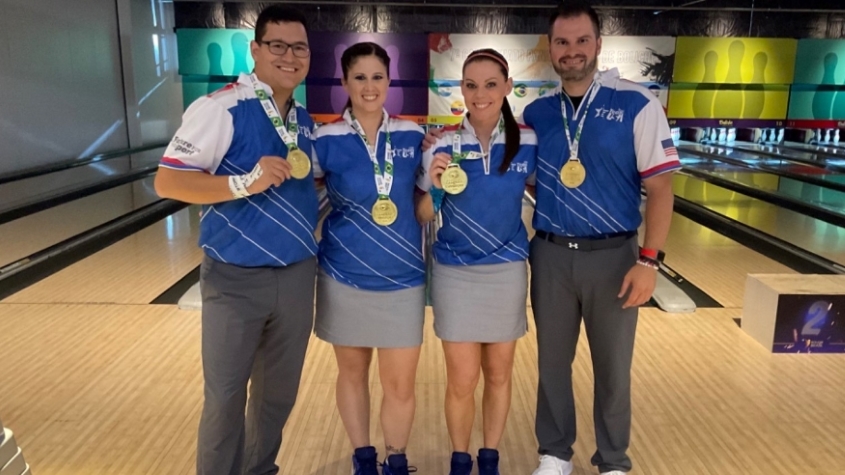 Rio de Janeiro – One day after capturing all available gold medals in doubles competition, all four Team USA bowlers positioned themselves at or near the top of the standings after the opening round of singles at the PANAM Bowling Champion of Champions held at the Bowling Social Club in Rio de Janeiro on Wednesday.

“It’s kind of surreal to be in first place in singles because I didn’t even know that was the case until I walked by the scoreboard,” Prather said. “I was just really focused on executing good shots and helping A.J. (Johnson). It was about team bowling, sticking with my process and trying to knock all the pins down.”

Shannon O’Keefe of Shiloh, Illinois, has certainly been effective at knocking all the pins down thus far at this event.

She followed up Tuesday’s tournament-best 1,929 doubles set with 1,826 during her opening eight games of singles. That put the 43-year-old right-hander in second place in women’s singles just nine pins behind the top score of 1,835 shot by Aruba’s Kamilah Dammers.

Bowling in her last tournament as a member of Team USA, O’Keefe is making the most of her opportunity. Her two-day, 16-game total of 3,755 (a 234.69 average) is tops among all Champion of Champions bowlers, male or female.

“The lanes were a little bit different today, but I made some good choices, controlled the pocket and executed really, really well,” O’Keefe said. “Putting yourself in position to win is all you can really ask for, so I’m just going to keep my head down, keep making the best shots I can and hopefully leave with some hardware.”

Bryanna Coté of Tucson, Arizona, is in position to grab some hardware of her own after she shot 1,796 (a 224.5 average) to secure third place in women’s singles with one block remaining.

After watching O’Keefe fire a 299 during the opening game of doubles on Tuesday, Coté got into the act herself Wednesday, starting Game 5 with the front 11 strikes on the same pair of lanes before a 10 pin ended her run at 300 just as it had done to O’Keefe one day earlier.

“We knew what the lanes were going to be like going into that game because we started on that pair yesterday, so I was really comfortable,” Coté said. “The last shot was a little bit firmer, which caused it not to carry, but I’ll take a 299 any day.”

The big game and set helped Coté move into third place in the women’s overall standings with a 16-game total of 3,499, which is good for a 218.69 average.

A.J. Johnson of Oswego, Illinois, has been equally impressive during the first two days of competition at the Champion of Champions.

The powerful right-hander followed up Tuesday’s 1,921 doubles effort with a steady 1,756 on Wednesday. That set put Johnson in fifth place in men’s singles, just 22 pins out of medal position and less than 100 pins out of first place with eight more games to bowl Thursday.

“Sticking to the process and mind frame has been working great,” Johnson said. “There were a lot of times that really tested my patience today, and, in the past, I might have let that snowball and take over the block.

“I just made sure to stick to everything that we’ve been working on and all the things that have been going well. That’s been great, and I’m looking forward to eight more games of bowling tomorrow.”

With all four players in medal contention and the team in prime position to secure an advancing spot to the 2023 Pan American Games in Santiago, Chile, Team USA Head Coach Bryan O’Keefe is looking forward to Thursday’s action as well.

“The lanes played differently today, but I think we did a really good job adjusting to that for both the guys and the girls,” O’Keefe said. “We’re going into tomorrow in prime position to take home some more medals, which is all you can ask for.”