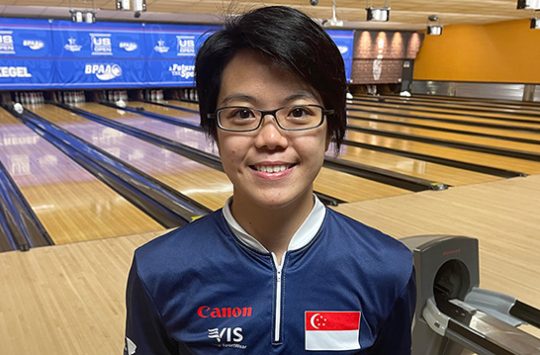 SOUTH GLENS FALLS, N.Y. - Through 24 games across three days and three different oil patterns, Singapore’s Cherie Tan maintained her three-day lead after the third round of qualifying at the 2022 U.S. Women’s Open.

Tan averaged more than 230 on Saturday night to maintain the pole position and finished with a 24-game total of 5,180.

The top 30 players after 24 games advanced to Sunday’s fourth round, with the final spot going to reigning champion Josie Barnes of Hermitage, Tennessee, with a total of 4,774, a 198.9 average.

Competition at Kingpin’s Alley Family Fun Center continues Sunday at 10 a.m. Eastern with the fourth and final qualifying round on a 38-foot oil pattern.

Competitors will bowl an additional eight games before the field is cut to the top 24 athletes. Those players will then bowl 24 games of round-robin match play over two days, with seeding based on their 32-game pinfall totals.

There will be 30 bonus pins awarded for each win in match play, and the 56-game pinfall totals, including bonus pins, will determine the five players for the championship stepladder.

All rounds of qualifying and match play are being broadcast live at BowlTV.com through Monday night, and the event will conclude live Tuesday on CBS Sports Network at 7 p.m. Eastern.

It’s been business as usual for Tan, who now leads for the third consecutive day. While she struck often, her block wasn’t without a few hiccups of which she overcame.

“I think the fresh was a lot easier,” Tan said. “And then in the middle, I kind of ran into some trouble. I managed to string quite a few strikes, but I think on some pairs, the lanes were a little unpredictable because my ball just suddenly read up on a few pairs. Then I had a big, fat split in the middle of all the strikes, so I lost quite a lot of pins for a few games, and I think that was quite sad. But, I can’t complain because I’m still up there. It’s a new day tomorrow, so we’ll see how it goes.”

The three-time Professional Women’s Bowling Association Tour champion will turn her attention to the fourth oil pattern, which has a significantly lower volume of oil (18.7 milliliters) than either of the previous three lane conditions. It also is the only pattern remaining and will be used for the fourth qualifying round, match play and the finals.

She’ll be working on adjusting her arsenal to help combat the new challenge. All 30 advancers will have the opportunity to practice on the 38-foot pattern at 8 a.m. Eastern prior to the start of Round 4.

“A few of them will be in play,” said Tan, with a laugh. “But, the rest look horrid. It’s a much lower volume, and it’s shorter, so I don’t think they look good. I think I’m drilling a couple of balls to see if I have a better reaction.”

Richard has been near the top of the standings all week but struggled to close out rounds on Thursday and Friday. She ended each of those blocks with games of 157 and 151, and had those games been closer to 200, she might have held the overall lead.

The two-time PWBA Tour champion was focused on making sure she finished Saturday's round strong.

“It's really frustrating to end that way,” said Richard, who had an eight-game block of 1,860. “If you take those two games out, I'm 150 over and leading. Of course, it's not really what I'm thinking about, but I want to pick up as many pins as I can moving forward and to go 150, 150 is really defeating. But, I put it behind me after talking to my mom.

“I think I was more stressed going into Game 8. Then, I started the first frame with an open and I said, ‘Oh God, here we go again.’ But, I stayed patient. I got through the game, and I shot 220 (223) and finally finished it. So, it feels really good that I finally had a good day. And, it’s not that I wasn't walking away happy every day, but that one game really puts a damper on things.”

There also were some major moves made in the standings by Singapore’s New Hui Fen and England’s Verity Crawley. New posted the highest block of the day with 1,934 and moved from 35th to eighth place during B squad Saturday night, while Crawley tossed an eight-game block of 1,881 to move from 43rd to 16th place. Crawley bowled Saturday afternoon during A squad.

For more information about the U.S. Women’s Open, visit BOWL.com/USWomensOpen.