ARLINGTON, Texas – The Atlanta-based Strikers bowling program has about 120 participants competing on Saturday mornings during the season, and four of the best 15-and-under members from the program joined together to capture a national title.

The Strikers took home the first 15-and-under team title at the USA Bowling National Championships, winning the best-three-of-five Baker finals that were televised on CBS Sports Network on Monday.

The inaugural USA Bowling National Championships took place in Indianapolis in July and the finals at Western Bowl were taped for broadcast. In the Baker format, team members alternate frames, and with four-player teams for the event, the leadoff person for each team bowled the first, fifth and ninth frames, while the second team member bowled the second, sixth and 10th frames.

The Strikers, representing the South Region, had just one open frame in the first two games, posting victories of 217-149 and 239-205 to take a 2-0 lead against the Clams, the Upper Great Lakes champion from Mankato, Minnesota.

“We knew (the Clams) were a good team and we just wanted to stay clean and execute our fundamentals,” said Bill Johnson, who coaches the Striker program with his wife, Ellen. “They didn’t panic. They just stayed with their game. Being up 2-0, you’re not really stressing when you are executing your shots.”

In Game 4, Faith Hardy watched a 4 pin tumble late in the fourth frame and that strike would help give her team a lead that Hardy and teammates Jhalen Embery, Tyrell Ingalls and Dawson Stewart would not relinquish. In the final frame, Tyrell stepped up needing a spare and 9 pins for the title, and delivered a strike on his first shot in a 194-183 victory.

“This team had great chemistry,” Ellen Johnson said. “They were composed, they were poised and they were ready to play. I’m proud of them and couldn’t have asked for better.”

The Strikers posted a 12-3 record, averaging just over 203 per game, to earn the top qualifying spot for the double-elimination bracket. Jhalen said being from the same center, and knowing and supporting each other, helped the team succeed.

“We’re good friends and we say if we miss something, we pick each other up,” Jhalen said. “We had all these people cheering us, that gave us adrenaline to make the shots … we’re pretty good as a unit.”

The team members did pick up one another as each team member had strings of strikes at different points in the title match. Dawson called it a “team effort” and said bowling on TV did add a different element.

“I was really nervous, I was just trying not to choke,” Dawson said. “Being a national title, everybody watching, the cameras all around us … I just tried to not think about it too much.”

The Clams had reached the title match after qualifying sixth, then rolling through their side of the bracket. The team consisted of Riley Anfinson, Korey Balbach, Nolan Bianchi and Alex Sieberg. Dan Anfinson and Kurt Balbach coached the team. 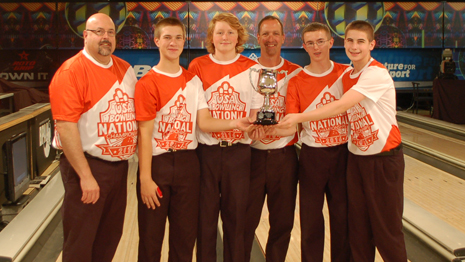 At the national tournament, all teams bowled 15 qualifying games to determine the seeds for the double-elimination match-play bracket, which decided the two teams that would meet for the inaugural titles on national television. The Baker format was used for all qualifying, with best two-of-three matches determining which teams advanced in the bracket.

International Bowling Campus Youth Development introduced the USA Bowling National Championships with four regional events in 2013. The championships grew from the team-based USA Bowling program youth program, which was designed to introduce youngsters to the sport by following the same structure as other youth sports by placing children on a team, providing a coach and holding regular practices along with weekly competitions.