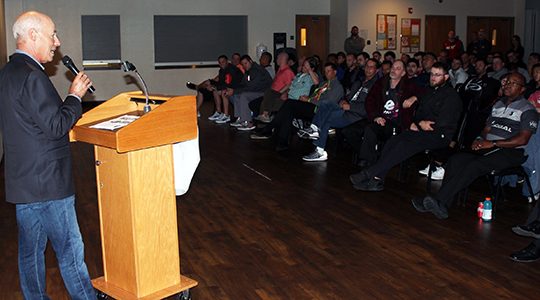 During the annual PBA players meeting prior to the start of the FloBowling PBA Fall Swing in Owasso, Okla., earlier this week, PBA Hall of Famer Marshall Holman accepted an invitation from the PBA to talk about the role of PBA players and all professional athletes as entertainers.

During a colorful career in which he won 22 PBA Tour titles over a span of more than two decades, the volatile Holman built one of the PBA’s largest love-hate fan bases, but always respected the game and in retirement has continued to embrace the sport’s fans through his involvement as an unofficial ambassador for the PBA.

The meeting also brought players up to speed on new media partners FOX Sports and FloSports, ushering in a new era of the PBA heading into the ground-breaking 2019 season.

At the members’ gathering in Owasso, PBA CEO-Commissioner Tom Clark announced that PBA players will have four opportunities to bowl for a $1 million bonus if any of them can roll a 300 game in the title match of four PBA tournaments in 2019.

There have been 26 perfect games bowled on national television throughout the PBA’s history, but only two in title matches: the first by Bob Benoit in defeating PBA legend Mark Roth, 300-255, in the title match of the Quaker State Open in Grand Prairie, Texas, in 1988, and the second by PBA Hall of Famer Mike Aulby in the highest scoring title match in PBA history, topping David Ozio, 300-279, in the finals of the 1993 Wichita (Kan.) Open.

The “Hall of Fame VIP Experience” project involves a nation-wide fund-raising raffle that will provide one lucky winner with a once-in-a-lifetime experience centered around the PBA tournament and PBA Hall of Fame induction ceremonies in Arlington Jan. 5-6.

The PBA Hall of Fame Classic will be the first event of the 2019 Go Bowling! PBA Tour season and the first PBA championship to air live on FS1 as part of the PBA’s new television agreement with FOX Sports. The stepladder finals will be televised on Sunday, Jan. 6, at 11 a.m. EST from the ITRC in Arlington.

Raffle ticket sales, for $20 per ticket, are currently underway at participating bowling centers throughout the U.S., or by contacting the IBM/HF at 817-385-8230 or www.bowlingmuseum.com. The winning ticket will be drawn on Facebook Live on Tuesday, Dec. 18 at 2 p.m. EST. All proceeds from the raffle will benefit the museum's Frame4Frame Film Restoration Initiative which is intended to restore and preserve the IBM/HF’s irreplaceable collection of history bowling films.

The lucky winner will receive:

● Round-trip travel and meal expenses for two to the International Bowling Campus, site of the 2019 PBA Hall of Fame Classic.

● Special exhibit ribbon-cutting at the museum.

● Tickets to the PBA Hall of Fame cocktail party.

● VIP seating at the PBA Hall of Fame Awards Banquet.

● Meet and greet with PBA Hall of Fame bowlers.

● VIP seating at the live FOX Sports televised-finals of the PBA Hall of Fame Classic on FS1.

● Photo in a national bowling magazine.

● Tons of photo and autograph opportunities.

A new app to access pba.com, including live scoring when any PBA event is live, the latest PBA news, tournament schedules, player bios, the extensive archive of records, facts and figures residing on the PBA’s official website and more, is now available via Google Play. To load the free app, click here: https://play.google.com/store/apps/details?id=com.pba.

Hurricane Michael forced the postponement of the PBA-PBA50 Station 300 Baker Doubles planned for the Oct. 13-14 weekend in Bluffton, S.C. PBA South Region tournament manager Sam Zurich said he and the tournament host center will explore the possibility of re-scheduling the event for a later date.

Teams in the event included one bowler between the ages of 50 and 59 and one bowler over the age of 60. This was Ventura’s eighth PBA50 regional title and Zaffino’s 11th. The champions split the $2,800 first prize.

In the best-of-three-game semifinal round, Ventura and Zaffino defeated Darryl Bower of Middletown, Pa., and Michael Tryniskiof Fulton, N.Y., 2-0, while Gran and Kretzer downed William Peters of Dayton, Ohio, and Eddie Graham of Kettering, Ohio, 2-1, to set up the championship match.

● The final PBA Regional events of October take place over the Oct. 26-28 weekend, including the PBA50 Bryan’s Bowling Center East Open presented by the Hopkins Automotive Group and 900 Global in Laurel, Del., and the South Point West Challenge and PBA Member-Nonmember Doubles, both presented by Radical, at South Point Bowling Plaza in Las Vegas

● For complete PBA Regional schedules, rules and entry information, visit pba.com, open the “schedules” tab and click on PBA Regional Tours to find the event(s) in your area…and remember, you can follow “live scoring” for all PBA Regional events on pba.com (easily accessible for Apple and Android device users using the PBA app).