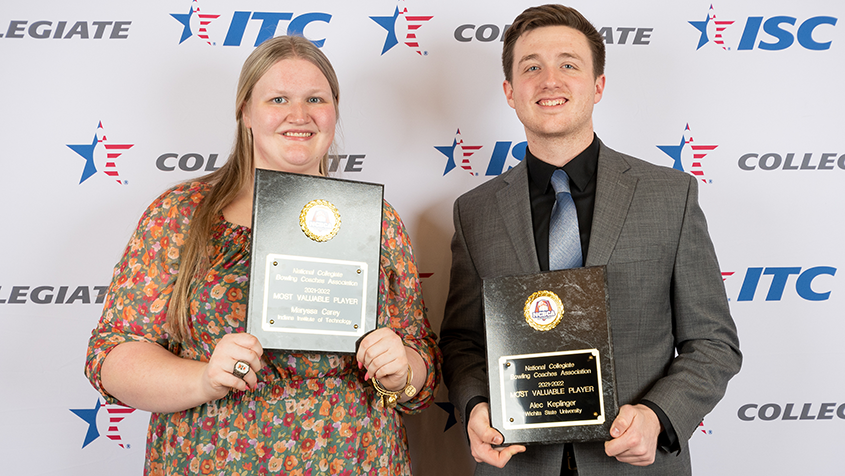 NAPERVILLE, Ill. - Indiana Tech's Maryssa Carey and Wichita State's Alec Keplinger have been named the Most Valuable Players of the 2021-2022 collegiate season by the National Collegiate Bowling Coaches Association (NCBCA).

The announcement was made during the Night of Champions banquet Wednesday at the Embassy Suites Chicago Naperville. In addition to Carey and Keplinger being recognized, the NCBCA All-America teams and several other award winners were announced.

The ceremony was broadcast live at BowlTV.com.

The Storm/International Bowling Media Association (IBMA) Collegiate Award winners also were announced Wednesday, with Carey and Keplinger being named Bowlers of the Year.

Carey, who is in her fifth season with the Warriors, finishes her career with four appearances on NCBCA All-America teams. She also was on the first team during the 2019-2020 season and collected a pair of second team nominations in 2017-2018 and 2018-2019.

Botero also was recognized as the top newcomer during the 2021-2022 season, winning the women's NCBCA Rookie of the Year award.

The right-hander posted two wins, three top-five finishes and seven top-10 placements during 11 events in the regular season. He was second in average differential (34.77) and third in average in the men's division with 216.68.

The men's NCBCA Rookie of the Year is Wichita State's Spencer Robarge, who also earned a spot on the All-America second team.

The NCBCA Gordon Vadakin and Kerm Helmer Coach of the Year awards went to Katie Thornton of Savannah College of Art and Design-Savannah and Andy Diercks of Mount Mercy, respectively.

Thornton earned the distinction for the first time in her career. Diercks claims the award for the third straight year, becoming the first coach to earn the honor on either the men's or women's side for three consecutive seasons.

Bo Shipley was named the Gordon Teigen Meritorious Service Award winner for 2022. Shipley was recognized through his work in helping preserve and grow the Hoosier Classic, which typically serves as the final Tier I competition of the United States Bowling Congress Collegiate season. The annual award recognizes an individual for outstanding service to collegiate bowling.