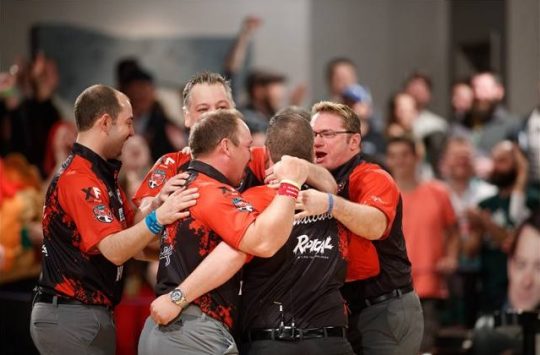 The live finals average viewership was up 18 percent over last year’s Roth/Holman Doubles. Viewership through 13 PBA on ESPN shows is averaging 642,969 viewers, up 13 percent year-over-year. ESPN’s SportsCenter included highlights from the finals on Sunday night and Troup appeared live via satellite on Tuesday morning’s SportsCenter to talk about the win and his career following in the footsteps of his father Guppy Troup.

ESPN Senior Vice President of Programming Scott Guglielmino said the upcoming schedule will be a treat for fans. "Our remaining slate promises to be exciting, with the action and drama from the PBA League wrapping up the season,” Guglielmino said.

Guglielmino noted the PBA’s strong February featured six PBA shows including three major championships. The PBA on ESPN averaged an audience of  713,000 viewers, reaching more than 13 million total viewers during the month. During the PBA’s “Big February” run from 2015-17, there have been 15 ESPN telecasts averaging more than 767,000 viewers per show.

Teams were seeded into the Elias Cup elimination rounds during an eight-game qualifying event held earlier in the week at Bayside Bowl. Kyle Troup and the hometown favorite L.L.Bean Portland Lumberjacks, the no. 3 seed, will headline the April 30 telecast, bowling against the no. 6 Barbasol Motown Muscle. The final quarterfinal round match will pit No. 2 Live + Work in Maine Silver Lake Atom Splitters taking on no. 7 MaineQuarterly.com Brooklyn Styles.

All quarterfinal and semifinal round matches are best-of-two-game Baker format contests, with a one-ball sudden-death roll-off deciding any match that ends in a tie.