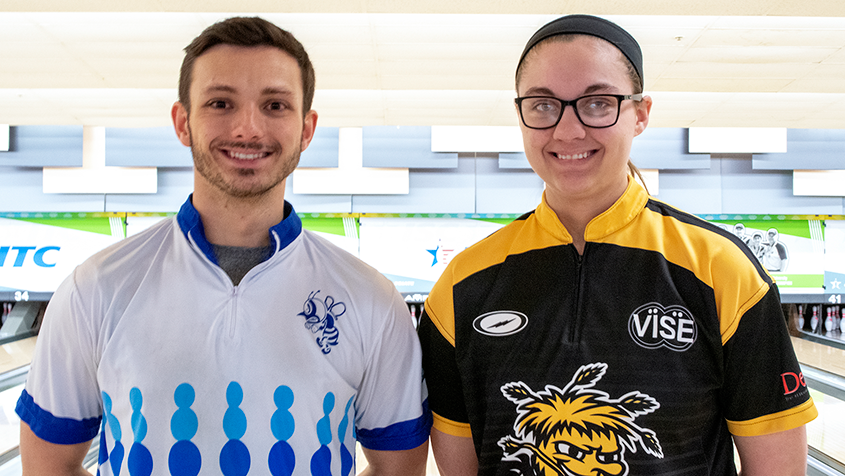 The 24 men and 24 women, who earned spots in the event through sectional qualifying, bowled six games of qualifying Tuesday morning to determine the bracket for match play. The top eight qualifiers received a first-round bye, while the remainder of the field started match play Tuesday afternoon.

Orf opened her six-game qualifying round with a game of 262, and she closed with 245 to post a 1,324 total, a 220.66 average. She won the Dallas sectional to advance to the national tournament and is continuing her winning pace through the first day of competition.

"It's pretty awesome knowing that all the pieces are coming together at the right time," Orf said of corralling the top qualifying position. "With all the help I've had throughout the season from my coaches at Wichita State, and them welcoming me into their program with open arms, really means a lot to me. Getting off to a good start is just a great confidence booster, and having a first-round bye gives me time to talk with Coach Rick (Steelsmith) and strategize for match play. Overall, I'm just really excited for the remainder of the week."

Orf will square off against Rebecca Dodson of Mount St. Mary's when the second round of match play begins Wednesday at 8:30 a.m. Eastern. Dodson recently was announced as part of the 2022 National Tenpin Coaches Association All-America team as an honorable mention.

Match play is single elimination, and all bracket matches consist of three games, with total pinfall determining the winner.

Dodson won her opening match against Victoria Giardina of Lawrence Tech, 577-532, on Tuesday to advance.

In the men's division, Stubler noted because of Monday's practice session and Tuesday's qualifying round, he was able to see the fresh and true transition of the lane pattern twice ahead of match play. This was helpful because if he didn't have a good look in practice, he could find something during qualifying without the stress of being eliminated.

"I was really fortunate today that my look in qualifying was very similar to practice yesterday," said Stubler, who ended the six-game block with a 238 game and 1,238 total (206.33 average). "I was really happy about that. I was able to get off to a good start with a couple of games of 210 or better (214, 213), and from then on, I tried to see how transition would play out and played it safe."

BowlTV.com will have all qualifying and match-play rounds of the ISC leading up to the televised finals.
Skip Ad